Crete is the biggest Greek island where the long coastline (approx. 1066 km) gives space to hundreds of wonderful beaches. We can find both sandy and also pebble beaches, very crowdy as well as quiet, washed by azure blue sea and often surrounded by nice Cretan nature.

To be the most beautiful beaches of Crete traditionally the beaches of Balos, Falassarna and Elafonissi are considered. However, also the palm beach of Vai is quite famous and the tourists with children like to visit the beaches lying in the close neighbourhood of the capital city of Heraklion. 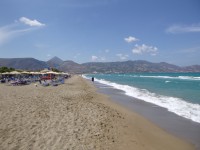 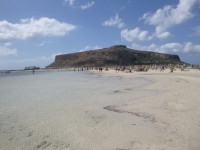 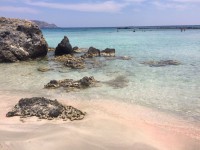 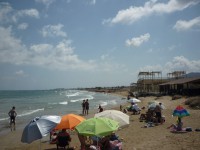 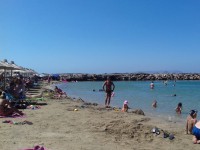 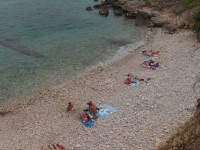 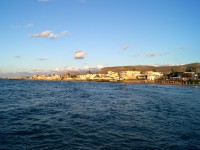 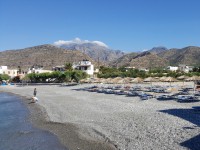 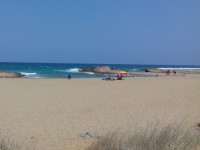 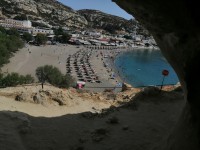 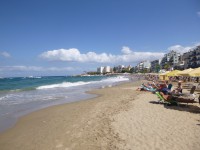 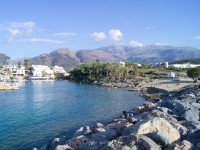 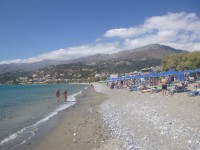 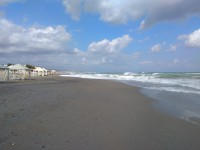 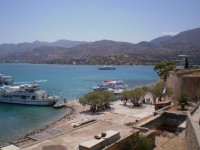 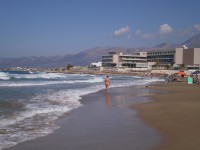 Coasts of Crete in general

The Greek island of Crete has a longitudinal shape and most of the beaches lie on its north and south coast, but although the east and the west coast are very short compared to the coasts of the north and south, they are not insignificant, as the most beautiful beaches of whole Crete are located right here.

On the northside, Crete is washed by the Aegean Sea (sometimes this part of the Aegean Sea is also called Cretan Sea) and on the southside by the Lybian Sea. The warmer Lybian Sea and the closeness to Africa are causing that the south part of Crete is warmer than the north coast. The differences between the north and south are not only in the climate, but also in the geography. While the north coast is slowly descending into the sea and has many beautiful wide beaches with shallow sea, the south coast is rockier with steeper access to the sea. (More information in the Main article - Geography and nature attractions of Crete)

Some beaches are well-organized, other are left natural, but in general, the beaches on Crete are considered as very clean and regularly awarded by the so-called Blue Flag of the EU.

During the summer season, Cretan coasts are affected by the nature phenomenon of strong dry northern winds known as ŌĆ×meltemiŌĆ£, which can be bothering, if somebody would like to relax on the beach or bath in the sea because the winds are causing big waves and blowing sand into the eyes. Unfortunately, Meltemi Winds are difficult to be prepared for, because the time and the place of their appearment as well as their strength cannot be predicted in advance. The winds appear mostly on Crete┬┤s north coast, but nevertheless even the south has to face them sometimes. Despite the winds can be quite strong, they seldom have a destroying character, but make stay in the hot sun more tolerable.

Most beautiful beaches of Crete

To the most favourite beaches of Crete, namely of its province of Chania, definitely belong the beaches of Balos, Elafonissi and Falassarna. The visitors of the Rethymno Prefecture fell then in love with the Preveli Beach and if you go to the eastern part of the province of Lassithi, it is worth to visit the Vai Beach. However, you can find very nice beaches and places to swim wherever you decide to spend your vacation. For example in the north of the Heraklion Province, there is a long mostly sandy coastline stretching which is full of many beaches lying side by side. Especially the beaches of the resorts of Kato Gouves - Analipsi - Anissaras are very popular among the tourists. (More information in the section Crete - Resorts)

The most touristic part of Crete is the province of Heraklion. It is therefore not a surprise, that the most good-equipped and favourite beaches of the north coast lie in the neighbourhood of the capital city of Heraklion. There are many small and calm resorts with beautiful wide sandy beaches in the east and west from Heraklion. West of the capital city, very popular are the long gold sand beaches of Ammoudara, Lygaria or Agia Pelagia. On the contrary, famous beaches lying in the east of Heraklion are Amnissos, Kokkini Hani or Analipsi, also very nice wide beaches with smooth sand. All of the mentioned beaches are regularly awarded by the Blue Flag of the EU for their equipment and clean environment. Further to the east the along the coast, we can find the most lively resort of Crete Hersonissos-Stalis-Malia, fringed with the eponymous sandy and pebble beaches.

One of the most favourite destinations of Lassithi Province is the Mirabello Bay and the regional city of Agios Nikolaos, a very modern and picturesque resort with a beautiful harbour and luxurious coast promenade. Except Agios Nikolaos, people also like to visit the peninsula of Spinalonga, where they have the opportunity to explore the old Venetian fortress as well as to relax on a little beach under it and also to see the sunken Ancient Roman city of Olous. The ruins of the flooded city can be explored by snorkelling or scuba diving, therefore is Olous a hot tip for the fans of these sports, who will definitely not be disappointed.

Beautiful beaches can be found also in the western part the Chania Prefecture. Some examples of good-equipped beaches located in the west are the long well-organized sandy beaches of Agia Marina, Platanias and Stalos, which are together considered to be the biggest resort of western half of Crete and popular among the tourists with small children, because of their easy access into the sea and clean environment.

The western coast of Crete got the nickname ŌĆ×Caribbean CoastŌĆØ because of the exotic-looking white sandy beaches washed by azure blue sea, which can be found here. One of the most beautiful and popular beaches of Crete is Elafonissi Beach, lying at the south western tip of the island. It is surrounded by cedar trees and especially known for its pink coloured sand. Together with the very nice looking Balos Beach, which is located on the small island Imeri Gramvousa in the north western tip of Crete, they belong to the most photographed beaches of Crete. The island of Gramvousa is well-known for the Venetian Gramvousa Fortress, which is towering above the Balos Beach and also for the sea where even some sunken ship wrecks can be seen by snorkelling and diving.

Not far away from the city of Kissamos, a long sandy beach of Falassarna is stretching between the beaches of Elafonissi and Balos. Falassarna Beach is popular among the tourists with children because of its good organisation and equipment. The soft sand, covering the beach, is one of the reasons why also a windsurfing school is available here during the summer season. The whole western region of the island belongs to the prefecture of Chania.

On the contrary, the most beautiful natural beaches on Crete, visited mostly by people, who prefer relaxing and spending the time on quiet beaches, lie on the south coast of the Rethymno Prefecture. To this kind of beaches belongs the beautiful ŌĆ×Palm beachŌĆØ of Preveli, stretching at estuary of a river, near to a small lake surrounded by beautiful nature, and further also the beaches of Skinaria, Ammoudi and Damnoni located near to the Plakias Beach, which are told to have the most turquois shining water.

Along the coast of the small Messara Bay (in the Heraklion Province), the beaches of Kalamaki, Kommos and Matala can be found, whereas the beach of Matala is popular because it was a meeting place of the ŌĆ×HippiesŌĆØ in the past. It has dark coloured sand and a nice scenery made by rocks and caves.

Kommos is one of the longest beaches on Crete and lies north of the Matala Beach. In its neighbourhood, a small Minoan archaeologic site is located.

Further to the north of the bay, there is another nice long beach of Kokkinos Pyrgos (also known as Tymbaki), which has a lively harbour and many bars and tavernas providing relaxing sunbeds with umbrellas.

At the north east tip of Crete, in the area of Lassithi Province, the famous Palm beach of Vai is located. Its peculiarity is the biggest palm forest in Europe, counting about 5000 trees. The soft sand, clear water and beautiful surroundings make the beach an ideal place for families with children.

The above-mentioned beaches are just a fragment of their total amount, as the island of Crete is full of wonderful beaches. To get a better overview you can check our map of the Cretan beaches.