The Greek island of Rhodes still draws on its long and colourful history. The island was inhabited already in the Stone Age, but the first significant period came later with the antiquity and the appearance of the first ancient monuments. Also Rhodes benefited greatly from its strategic location in the past. Due to its location on the important maritime routes between the Mediterranean and the Aegean Sea, it was one of the big players in this area. Throughout its history, Rhodes has gone through several important periods, influenced by many various nations with different cultures, traditions and languages. All this has left its mark on the present form of the island. 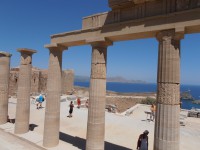 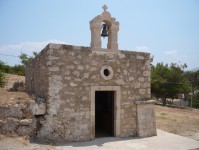 The era of the Byzantine Empire and Christianity 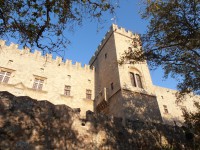 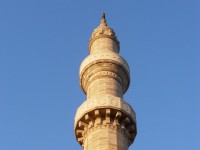 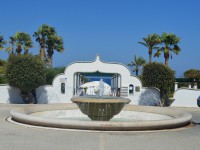 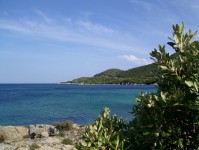 According to Greek mythology, the creation of the island of Rhodes is connected to the story of the gods fighting the mighty Titans for control of the world. After a victorious battle, Zeus decided to divide the Earth among the Olympian gods. However, during the actual division, he forgot the sun god Helios, who was wandering around the sky in his sun chariot. Helios was therefore additionally promised, that the land, that would emerge from the sea would be his. This land was illuminated by the brightness of Helios and a beautiful island was created, which is still known as the sunniest island in the Aegean Sea. Since then, the god Helios has been the patron of Rhodes and many monuments, especially from antiquity, have been dedicated to him.

In the ancient times, several nations influenced the life on Rhodes, the most important ones were the Minoans of Crete (1700-1600 BC), the Phoenicians, the Achaeans and the Dorians. The Dorians built three strong city-states of Kamiros, Lindos and Ialysos, between 1200 and 1100 BC, which subsequently agreed to establish a new city-state, that would constitute the capital city of Rhodes. Thus, in 408 BC, according to the project of Hippodamus of Miletus, the city of Rhodes which is the capital city of the island of Rhodes to this day was founded.

The period of antiquity is considered as the "Golden Age of Rhodes". Rhodes became an important naval power, disciplines such as art, philosophy and literature flourished here and also a school of rhetoric was founded here.

And although Rhodes was a part of great political-military coalitions, it was not exempt from the efforts of other nations to dominate its territory and influence. In 305 BC, Demetrios Poliorketes set out for Rhodes, with great expectations of his success. However, after a year-long siege, he left defeated. The inhabitants of Rhodes believed, that their patron god Helios had helped them in the battle, and out of gratitude they decided to build a magnificent statue in honour of the god, known as the Colossus of Rhodes.

The Byzantine Empire and the emergence of Christianity

The sovereignty and independence of Rhodes was ended by the Roman invasions in 164 BC, when Rhodes became one of the provinces of the Roman Empire (in the early Christian period until the 7th century, Rhodes belonged to the eastern part of the Roman Empire, known as the Byzantine Empire). The era of the Byzantine Empire is mainly associated with the construction of churches and the spread of Christian ideals.

The beginning of Christianity on the island of Rhodes is dated back to 50 AD, when Paul the Apostle landed near the town of Lindos and brought Christianity with him. To this day, this bay bears his name (St. Paul's Bay).

However, during the 6th and 7th century, several strong earthquakes hit the island and the first Arabs appeared on the scene. The Arabs eventually occupied Rhodes for several decades, they fortified the capital city with new walls and divided it into two parts (the first for military and political power, the second for the common people). Unfortunately, this period was mainly the time of devastation and decline for the island of Rhodes.

Knights of the Order of St. John, known as Johannites

The revival of the commercial importance of Rhodes occurred in the 11th century in connection with the so-called Crusades, as the Crusaders used the island to supply goods and ships. After the Crusades, some of the Crusaders fled to Rhodes and the Knights of St. John, also known as the Johannites, took control of the island in the 13th century.

The medieval period and the reign of the Johannites on Rhodes was marked by fortification and modernisation, both of the island and especially of the capital city of Rhodes. Massive walls with gates were built around the capital city and construction also took place inside the city, for example, hospitals, accommodation, churches and palaces. Particularly known is the so-called Palace of the Grand Masters, where the Grand Master of the Johannite Order resided. Under the rule of the Johanites, Rhodes once again became a major player in the Eastern Mediterranean.

The fortifications and the quality of the walls helped the knights to resist the raids of various nations for a long time. Eventually, in the middle of the 16th century, the capital city succumbed to a Turkish attack and Rhodes became a part of the Ottoman Empire.

In 1552, the Turkish Sultan Suleiman (nicknamed "the Magnificent One") attacked the island of Rhodes with a huge fleet of warships and launched a siege that eventually lasted six months and ended by a Turkish victory. The Turkish Sultan took control of the island and Rhodes became part of the Ottoman Empire.

However, under the Turkish rule, the commercial and cultural influence of the island declined, several earthquakes struck the area and Rhodes disappeared from the international scene. The Turks did not show much interest in architecture and new constructions; occasionally a temple was converted into a minaret or a manor house and also a Turkish bath was built in the capital city of Rhodes, but the towns slowly got depopulated. The island's economy was based mainly on agriculture.

In 1821, a great wave of resistance against the Turks arose on the Greek mainland where the mainland Greeks gained their independence. The Rhodians, however, were too exhausted to fight for independence and remained under Turkish rule until 1912.

In 1912, during the Italian-Turkish War, the Italians, with the help of the native Greeks, took control of Rhodes and the other Dodecanese islands. Turkish rule was thus replaced by the Italian rule, which was very different from the previous one. The Italians focused on the restoration of Rhodian monuments, especially from the era of the Knights of St. John and the European character of the island grew thanks to their influence.

Italian architects put a big effort for example, in the restoration of the Palace of the Grand Masters from which all the alterations from the Turkish era were removed and which later became the summer residence of the Italian Prime Minister and Fascist leader Benito Mussolini and also the seaside thermal baths of Kalithea underwent a major transformation. However, the Italians did not only focus on repairing historical monuments, but also introduced modern elements. Thus, an efficient irrigation system was created on the island, modern sewage systems were built and electricity was installed also to the more remote areas.

Italian rule lasted until 1943, when, after the fall of the dictator Mussolini, the island's military strongholds fell into the hands of German forces.

After the end of the Second World War, Rhodes and the other Dodecanese islands came under British administration until they finally became a part of Greece in 1948. Since the middle of the 20th century, Greece has been heavily oriented towards Western democracies and has joined alliances - in 1952, it became a member of the North Atlantic Treaty Organization (NATO), in 1954, it was one of the founding members of the European Organization for Nuclear Research (CERN), and it is also one of the founding members of the European Union (EU, after joining the European Communities in 1981). In 2002, Greece adopted a new national currency, the Euro.

During this time, there were also changes in the internal political affairs of Greece, with 1974 being a very significant year. In that year, democratic elections were held with a referendum in which the Greeks voted for abolishing the monarchy and introduction of parliamentary democracy. This ended the period of military dictatorship in Greece.

In the second half of the twentieth century, Rhodes has focused mainly on the growing tourism industry and the increasing demand of tourists, which includes the construction of new hotels, guesthouses and other accommodation facilities, the opening of new tavernas, various shops, bars and discos, and the widespread and well accessible rental of cars and motorbikes, beach and sports equipment, including various water attractions, windsurfing schools, small tour operators offering short trips around the island and its surroundings, etc. The economy of Rhodes is primarily based on tourism, but there is also a lot of farming, cattle breeding and fishing.