Crete is an island of many possibilities. Beautiful historical sites including the Minoan palaces, natural curiosities such as deep gorges and caves hidden in the wild Cretan landscape, sandy beaches and lagoons with azure blue sea and of course the capital city of Heraklion as well as other beautiful Cretan cities are waiting here for you. Do not miss out on getting to know the local culture and tasty Cretan cuisine and enjoy your vacation to the full ! 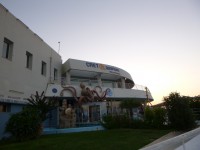 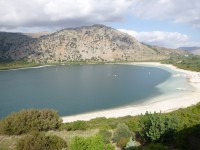 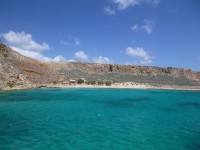 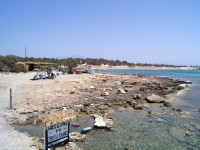 The Greek island of Crete has a very long and varied history and thanks to the big number of well-preserved sites, it can be seen also today. The first significant civilization that was inhabiting the island was the so-called Minoan civilization. It got its name after the king Minos and the mythical creature Minotaur. The most distinctive sign of the Minoans were big palace complexes, from where the adjacent regions were centrally ruled over. The palaces were located in Knossos, Phaistos, Malia, Agia Triada and Kato Zakros, but except the royal palaces, we can find also many other beautiful historical sites on the island, as for example ruins of buildings from the Byzantine period or Venetian and Ottoman buildings with typical architectural designs. Interesting are also the memorials from the World War II, which are reminding the Cretans the bravery and patriotism of then people.

Except the Minotaur, a terrible creature with a body of a man and a head of a bull, Crete is also closely connected with the highest Greek god Zeus. After the Greek mythology, Zeus was born because of the ruse of his mother Rhea, who escaped on Crete to give birth in the local cave of Dikteon Andron (near to the Lassithi Plateau), because his father Kronos was eating all his children, to prevent the prophecy of being overthrown by his son. After the birth, she packed a stone into the diapers and gave it to her husband Kronus, who swallowed it thinking that it is Zeus, like he did before to all his siblings. Later, because of his security, Zeus was moved to another Cretan cave of Ideon Andron (Ida mountains). Take a trip once to follow the footsteps of Zeus and visit also for example the Dia island, which is a nature reserve today because of the protected herbs and animals living here.

Nature attractions and monuments of Crete

Crete is surrounded by many bigger and smaller islands and some of them can be visited by a nice boat trip. To the most favourite islands among the tourists belong for example the beautiful islands of Gramvousa or Chrissi, whereas a very interesting tip for a trip is also the Gavdos island. The Gramvousa island with the same named Venetian Gramvousa fortress from the 16th century is located at the northwesternmost coast of Crete. The Chrissi island which is also called „the island of donkeys”, a paradise with wonderful white beaches and azure blue sea, lies at Crete´s south eastern coast. The island of Gavdos is the southernmost place of Greece and of Europe as well. On the contrary to the islands mentioned above, Gavdos is not a typical mass tourism destination. Because of its calm and isolated character, it is visited mostly by nudists and adventurers. A special tip for a trip is a boat tour to the neighbouring volcanic island of Santorini, which is attracting people from all over the world with its high steep rocks, beaches covered with black volcanic sand and white shining houses.

Crete is famous for its beautiful beaches, covered by smooth golden sand and washed by crystal clear water. Nevertheless, also the inland of the island does not lag behind with its beauty, as one of the European longest and deepest gorges Samaria, which is a part of the Samaria National Park, is located here. It is one of the few places on the island, where the endemic Cretan Kri-Kri goat is living freely in the nature. Except Samaria, well-known are also the gorges of Agia Irini, Aradena or the so-called Gorge of the death and the mountainous terrain has also a lot of caves. Besides the above-mentioned „caves of Zeus”, very interesting can be the stalactite Skotino cave, cave of Milatos with a chapel built inside or the caves in the rocks on the Matala Beach, which were formed by the sea. A very nice tip for trip can be also a tour to the Kournas lake, the only sweetwater lake on Crete. The lake has several small sandy beaches and is from one side surrounded by a few restaurants and cafes with a great view over the lake.

If you rather prefer to have fun in the swimming pools and to get an adrenaline rush on water slides, then visit some of the local Water Parks such as Acqua Plus, Limnoupolis or Water City.

For families with smaller children, the right places may be the Cretaquarium (Thalassokosmos), a sea aquarium where around 200 sea animals including sharks can be seen or the neighbouring prehistoric adventure Dinosauria Park with moving dinosaurs making sounds. The children will definitely be excited about these places.

Most beautiful cities of Crete

We can´t forget to mention the Cretan most beautiful cities. The capital city of Crete is Heraklion (Iraklio), lying in the middle of the north coast of the island. The city reflects the rich history of Crete, as we possibly can find sights from every historical period of the island here. The dominant sight of the city is the old Venetian harbour with the Koules fortress. The probably most beautiful city of Crete is its former capital city of Chania, well-known for its very nice historic harbour and city centre with many historical sites. Another often visited city is Agios Nikolaos, built around the Voulismeni lake, where a wonderful promenade with many cafes and restaurants is going along its shore. Also, the city of Rethymno, where the old Venetian Fortezza fortress is towering and where the local farmers are regularly selling their goods on street markets, is very beautiful and worth to see.

The character of the localities and the distance between them are one of the main factors whether to use public transport, rent a car, motorbike or boat or for example to get on board of a ferry. It is often necessary to combine the transport types. Another travel option are the facultative trips, which are organized by travel agency for their clients.

The most common offers of facultative trips are boat tours to the island of Santorini (belong to the most expensive trips), to the pirate island of Gramvousa and the Spinalonga peninsula as well as bus tours to the Elafonissi Beach and to the archaeological site of Knossos. All these trips can be made also individual on one´s own, however, it is recommended to use a travel agency for the route through the Samaria gorge, especially because of the organization as the passengers are brought by bus above the gorge and picked up by boats when they have finished the hike downwards.