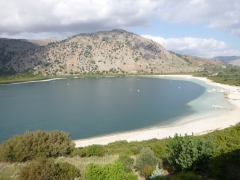 Kournas Lake is the only sweet water lake on Crete and creates a protected nature reserve with a unique ecosystem. The lake lies in the north western part of the islandÂ in the prefecture of Chania, close to the resort of Georgioupolis.

KrÃ©ta, Kournas Lake on the map

Kournas Lake as a nature reserve

Kournas Lake is located in a picturesque landscape surrounded by high mountains and olive groves. It was named after the eponymous small village of Kournas, which is located nearby and lies in the district of Apokornas, approx. 5 km south east from the Georgioupolis Beach and 20 km west from the city of Rethymno.

The lake is relative small (around 579Â 000 mÂ²) and round-shaped. It was formed by accumulation of water flowing from the Lefka Ori Mountains. The main spring is called Amati (or also Mati) what translated means "eye".

Kournas Lake represents an important ecosystem because it is one of the few places on Crete, where we can find fresh water all year. For this reason, it is protected as a part of the nature protection program Natura 2000. Inside the lake and also in its neighbourhood occur numerous rare animals and plants as for example ducks, herons, cormorants, gilt-head breams, eels and in some cases, it is also possible to see water snakes and sweet water turtles. The dark colouring of the water is caused by the grasses which are growing inside the lake.

Kournas Lake as an interesting tip for a trip

Kournas Lake is aÂ favourite place for recreation and walking where you can meet tourists as well as the locals. When you stay in the resort of Georgioupolis, we recommend you to visit the lake by foot as an interesting tip for a day trip.

On one side of the lake, there are restaurants and cafeÂ´s with a very nice view over the lake and with small sandy beaches, where it is possible to hire sunbeds with umbrellas respectively pedal boats or kayaks and to explore the lake and relax a little. You can also bath in the lake, as the water is clean and calm. During the winter time, the water level rises up and the beaches disappear under water. Along the street which is going to the lake, you can find many souvenir shops.

The lake is also used for irrigation of the agricultural soil in its neighbourhood. For this reason, there are drainage tanks good visible in some parts of the lake. Also, the soil around the lake can sometimes be very marshy, be therefore careful and pay attention to your safety everytime when you stay on or next to the lake.

Legends about the lake

Probably because of its dark colour, the people believed in the past, that the lake is bottomless. Today we know, that it is not this case â€“ the maximum depth is approx. 23 metres (in the southern part allegedly even 40 metres).

Another myth tells a story about a small village standing here in the past. Its inhabitants were very sinful and were punished by God. He sent a flood on the village and spared only the daughter of the priest, everybody else has drawn. It is told that a fairy can sometimes be seen sitting on a rock in the middle of the lake and combing her hair. The fairy is allegedly protecting all animals which are living inside and around the lake.

Kournas Lake as an interesting tip for trip