A specific recognizance sign of the Santorini archipelago is the volcanic caldera, a huge underwater crater that was formed by the volcano eruption in the 17th century BC. Three quarters of then island suddenly disappeared beneath the water. Let us also have a look on what has remained above the surface of the sea and what makes Santorini one of the most favourite tourist destinations in the world. 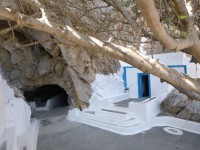 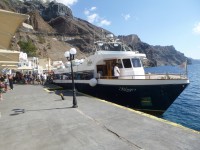 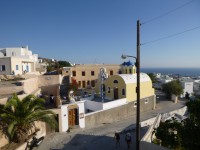 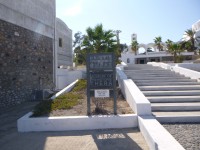 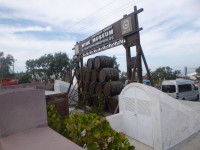 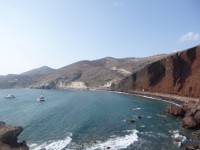 Most beautiful beaches of Santorini 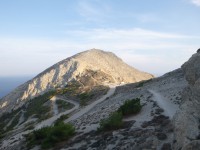 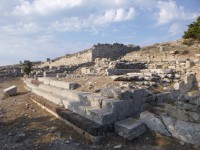 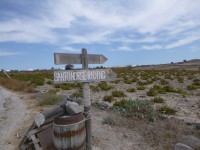 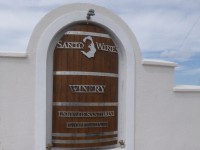 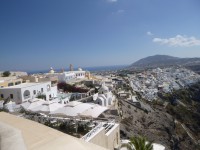 Tour to the beauties of the capital city of Fira 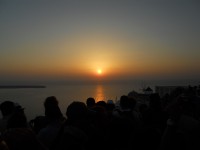 ...and visiting traditional villages of Santorini

Boat tours through the caldera belong to the most favourite tourist trips on Santorini and also many facultative trips have the caldera as destination. You can take part in a cruise around the caldera and visit the volcanic islets of Nea Kameni, Palea Kameni and Thirasia. While for visiting Nea Kameni we recommend you to have good shoes and a bottle of water, as you will go up to the volcanic crater at the top of the islet, at Palea Kameni you will have the possibility to enjoy a relaxing bath in the hot sulphur springs. On Thirasia, the biggest of the small islets, you can hire a donkey and get up to its highest point to admire the nice sunset or visit for example the village of Potamos, which is known for the so-called cave houses.

By boat you can also go along the south coast of Santorini, as there are the most beautiful beaches of the whole island. Especially the Red and the White Beach, named after the unique colouring of its surroundings, are very famous. The swimming in the sea takes place directly from the boat.

And what would you say to end such a nice trip by watching a beautiful sunset? It is possible to watch the setting sun from boat or to get off in the Ammoudi harbour and walk uphill to the city of Oia, which is very famous for its many possibilities to watch the sunset.

If you rather are a terrestrial person, you should definitely visit the capital city of Fira, a beautiful example of local architecture, offering wider shopping and entertainment opportunities. In the city we can find the Archaeological Museum of Thera, having as goal to map the human presence on Santorini from the oldest time periods until the Late Roman era. The museum is protecting many valuable artefacts, especially those from the 2 main archaeological sites of the island - Ancient city of Thera and Minoan city of Akrotiri. Another museum that can be visited in Fira is the Prehistoric Thera Museum

There are also less traditional museums on the island, for example the Lingnos Folklore Museum in Kontochori, Naval Maritime Museum in Oia or the Wine Museum in the village of Vothonas. If you are a lover of experience trips then focus on the famous Santo Wines winery, one of the biggest wine producers on Santorini that disposes with very modern equipment.

The tourists are being attracted by the local festivals as well. To the most favourite ones belong the "Jazz Festival" and "Ephestia". Ephestia is a series of festivities finished by firework show, presenting a virtual volcano eruption.

Although strong volcanic activity, Santorini can be proud of many significant historical sights and especially of number of monasteries, chapels and churches. Very beautiful is the monastery of Agios Nikolaos, Profitis Ilias (Prophet Elias) monastery, church of Panagia Platchani or the little church with the spring of Zoodochos Pigi, located the next to a cave that is protecting the "life-giving spring", high above the Kamari resort. The beauty of the nature of Santorini can be admired also from the back of a horse, as there are several horse farms offering a nice ride on the island.