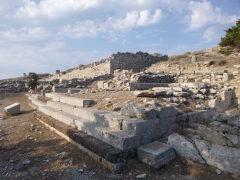 The ancient city of Thera (or also Thira) was extending on the foot of the Mesa Vouno mountains in the south eastern part of Santorini. It was a very developed city and a religion and trade centre of the island which you can, thanks to the archaeological excavations, admire also today.

Santorini, Visitation of Ancient Thera on the map

Ancient Thera belongs to theÂ most significant sights of SantoriniÂ and bears witness of its long colonization, as there were remainsÂ foundÂ already from the period of antiquity. Most of the artefacts come from theÂ Hellenic and Roman timesÂ and can be seen in theÂ National archaeological museum in AthensÂ or in theÂ Archaeological Museum of Thera, located inÂ SantoriniÂ´sÂ capital city of Fira. In the area of the excavations you can admire the ruins of theÂ Hellenic temple of DionysusÂ together with other persisted things or just walk along the fundamentals of the city walls and ruins of other buildings.Â More information about the history and shape of Ancient Thera can be found in the section Sights - Thera (archaeological site). A big part of the city has been discovered during the excavations thereforeÂ the site is quite vast and also good reachable and labelled.

TheÂ top of Mesa VounoÂ can be reached from two directions. From Kamari resort it is possible to go by car. If you want to go from Perissa, you have to walk on a small zig-zag path going to the top, which is definitely worth a walk.Â Thanks to theÂ height of 365 metres above sea levelÂ you can also enjoy a beautiful view.

For visiting the archaeological site an entrance fee has to be paid and in the last seasons the opening hours were limited from 8:30 to 14:30, with Monday closed all day.

Tips for trips on Santorini:Â Caldera Boat Trip, Sunset in Oia, Most beautiful beaches of Santorini, Discovering the beauties of the capital city of Fira, Visiting Ancient Thera