Rhodes, the sunniest island of Greece, will capture the hearts of not only lovers of warm weather and beautiful beaches, but especially of history buffs. Rhodes is very rich in monuments from the time of the Johanniter Knights, but there are also beautiful remains of ancient buildings and of course countless churches, monasteries and chapels. The most popular trip tips therefore include a visit to the capital city of Rhodes, the "white" town of Lindos and other historical sites.

However, the island of Rhodes also attracts visitors to its enchanting nature and natural attractions. The famous Valley of the Butterflies (Petaloudes) provides shelter for entire flocks of a special kind of moth, and the shady Seven Springs Nature Reserve provides a refuge for tourists from the relentless Greek sun. 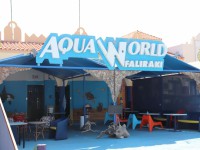 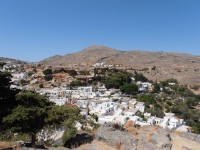 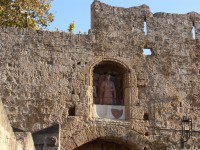 Monastery in the clouds Tsambika 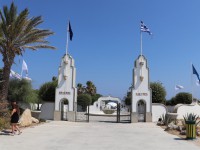 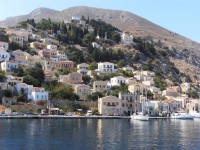 Valley of the Butterflies (Petaloudes)

The island of Rhodes boasts a long and colourful past, which has left its imprint on a number of preserved historical monuments. In particular, the eponymous capital city of Rhodes is a true paradise for history lovers, as they can admire ancient buildings, monuments from the time of the Knights of St. John or the Turkish quarter. There is also a great legend attached to the capital city, as in its old port of Mandraki, the majestic Colossus of Rhodes, one of the Seven Wonders of the Ancient World, is said to have stood.

In addition to the capital city, the beautiful "white town" of Lindos is also on the UNESCO World Heritage List. Both of these monuments are undoubtedly deserving the award. Lindos will catch your attention already from afar. The ancient acropolis with the temple of the goddess Athena towering on top of the hill, the massive Johanniter walls below and the original fishing village in the sub-castle. Step inside and let the unique atmosphere of the place draw you in.

In the period of ancient Greece, the three most important city states on the island were Lindos, Ialysos (Trianta) and Kamiros. The town of Ialysos is dominated by Mount Filerimos, which was once the site of an acropolis, and is now one of the most important archaeological sites on the island. Kamiros, the smallest of the three city-states, is situated in a beautiful setting on a hillside on the west coast of the island.

Interesting monuments from different historical eras can be found at almost every turn on Rhodes. As an ideal tip for a shorter or walking trip, we can recommend, for example, a walk to a nearby castle. Some of the most famous ones are the Monolithos Castle (located in the resort of Gennadi and perched high on a hilltop with a magnificent view of the coastline and the island of Chalki) or Kastellos Kritinia Castle (rated as the best preserved Johanniter castle in Rhodes, with Johanniter coats of arms visible on the outer wall).

The island of Rhodes and its natural attractions

Among the natural treasures of Rhodes, we would definitely highlight the Valley of the Butterflies (Petaloudes), which is chosen by the Jersey tiger butterflies (Euplagia quadripunctaria) every year as their home. They arrive here in flocks and cover the adjacent tree trunks and stones. The nature trail leads through a pleasant environment in the shade of the trees and the surroundings of the Pelekanos River, ending at the top of the Moni Panagias Kalopetras church.

Hikes to the shady woods and to the lakes are very popular in general, as you can observe the lush Rhodian nature and, of course, take a break from the hot sun for a while. Visitors to the Seven Springs Park (EptÃ¡ PigÃ©s) can relax in the shade of the pine trees or even take a walk in the icy water of the natural stream.

Surprisingly, there is also a small, lush oasis right in the capital city of Rhodes, the Rodini Park. Through the park, a small river is flowing, which takes the tourists to the Hellenistic tomb of Ptolemy with the preserved remains of stone columns.

An interesting combination of natural attractions and adrenaline-pumping water sports is offered by the Prasonisi Beach, located in the very south of the island, which is renowned as a "surfer's paradise". Prasonisi Beach is actually a strip of quicksand connecting the eponymous small lighthouse island with the rest of the mainland of Rhodes. This natural phenomenon is also known as the "kiss of the two seas", as each side of the beach is washed by a different sea.

Other popular excursions on Rhodes

Another popular tourist destination is the former seaside spa of Kalithea, which gained fame especially at the beginning of the 20th century, although its therapeutic effects have been known already since antiquity. The former spa and beach of Kalithea lies in a small rocky cove on the northeast coast of the island. Those who are interested can swim and snorkel in the bay and there is even a diving school.

One of the most beautiful beaches on Rhodes is the famous sandy beach of Tsambika. Swimming and playing in the fine, golden sand of the beach can be combined with an interesting trip to the eponymous Tsambika Monastery, which is nicknamed "the monastery in the clouds". From the top of the hill, you have a stunning view of the island's highest mountain, Mount Attaviros, and the east coast of the island.

On the slopes of Mount Attaviros lies the town of Embonas, which will be interesting especially for wine lovers, as it is home to the renowned Emery winery with a long tradition.

For a lighter touch, we also offer tips such as the marine aquariums in Rhodes or Faliraki. The Rhodes Marine Aquarium is located right at the northern tip of the island and visitors can observe the most famous animals of the Mediterranean Sea in its tanks. The Faliraki Marine Aquarium is a smaller aquarium, which is especially popular among children as they can touch some of the local animals. Beside the educational activities, the main purpose of the aquarium is to care for injured animals and then return them to the wild.

For those who love water and adrenaline, we can recommend a visit to the huge Faliraki Water Park. The number of pools and water slides is truly surprising and will captivate not only children.

Taking a scuba diving course could also be an interesting experience to bring back from your holiday in Rhodes. And no one needs to be shy, as courses are designed for beginners as well for advanced divers. Add to that the crystal clear Greek sea and there's nothing else to be added.

If you want to take a trip off the island of Rhodes, one of the most popular is traditionally a boat trip to the island of Symi. The island of Symi is famous for its sea mushroom fishing and the cultivation of herbs and spices of all kinds. However, the unique architecture of the place is what catches the eye of the coming people at first glance, as the hillsides around the harbour are covered with traditional stone houses glowing with different colours on all sides. The second harbour at the southern tip of the island is adorned with a precious historical monument, the Panormitis Monastery.

You can also take advantage of the proximity to other Greek islands such as Chalki and Kos. The island of Chalki lies off the west coast of Rhodes. It is a small and very rocky island and the destination of the cruise usually is its friendly and quiet harbour town.

The third largest island of the Dodecanese archipelago, Kos, is the birthplace of Hippocrates, the founder of modern medicine. Tourists head here mainly for the important historical monuments such as the Asclepion, the castle or the Roman Odeon.