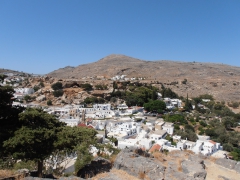 On the east coast of Rhodes, on a rocky peak jutting out into the sea, lies one of the most beautiful and admired places on the island - the village of Lindos. In a relatively small area, there are various traces of its long history, in particular the ancient acropolis with the temple of the goddess Athena, the Byzantine church, the fortifications from the time of the Johannite knights and the original fishing village of Lindos in the undergrowth.

Rhodos, White town of Lindos on the map

Acropolis of Lindos with the Temple of Athena of Lindos

Lindos, one of the three ancient cities of the island, gradually became an important maritime and commercial centre and flourished most during the reign of Cleobulus. The ruler Cleobulus has been described as a tyrant, but he also counts to the so-called Seven Wise Men of the ancient world, to whom famous sayings are attributed.

During this period, in the 6th century BC, the temple of the goddess Athena was built. The Temple of Athena of Lindos became an important religious centre of the island over time and its remains have been preserved on the acropolis of Lindos to the present day. The stairs leading up to the temple, which are over 20 metres wide, are a popular photographic motif as are the temple's preserved columns, which number about 20. Their proximity makes you suddenly feel so small.

Today, the 120-metre-high rock is dominated by a fortress built in the 14th century by the Knights of the Order of St. John. Once you cross its massive walls, it's like stepping back in time. Many of the original building elements remain relatively well preserved and ongoing archaeological excavations are uncovering more. In addition to the remains of the temple of the goddess Athena, you can admire, for example, a Byzantine Johannite church with a cross dome and an inscribed Latin cross.

As you climb up the acropolis on the stairs, which have recently been built for the convenience of visitors, you will notice the remains of the ancient stairs on your left and, a little higher up, the stairs from the Knight' s Period. At the top of the staircase is a relief of a Greek trireme.

The ancient village of Lindos

The ruins of the medieval walls of the Johannite castle seem to watch over the small white village spread out in the green below. Lindos, an old fishing village, flourished thanks to abundant shipping in the 17th and especially in the 18th century. But in the 19th century came the decline and today the whole area lives mainly on tourism.

You will find here countless stalls and souvenir shops, selling for example painted plates, ceramics, T-shirts or postcards. Where a shop cannot fit, an open window is enough for selling souvenirs. On the way up to the acropolis, local women use the path and its surroundings to sell hand-woven and painted textiles. Despite the interest of tourists, the village has managed to retain its original architecture and atmosphere, which attracts a large number of visitors. The low, white-painted houses and narrow cobbled streets have earned Lindos a place on the UNESCO list of heritage sites.

The small town is dominated by the Byzantine church of PanagÃ­a and the Plateia Eleftheria square with a huge plane tree in the middle. The square is the only place where buses and taxis are allowed to turn around, as the narrow streets do not allow them to do so elsewhere. The remains of the ancient amphitheatre are certainly worthy of attention, with the ornate aisles between the seats being a special feature. The ancient amphitheatre lies in the southern part of the village.

Trip to the village and the acropolis

In the season of 2015, the castle opened for visitors at 8 am and the entrance fee to the acropolis was 6 Euro. If you arrive by car, you can use the upper (south) parking place from where you go down to the village of Lindos. This is the only access road into the village. The stairs leading up to the castle can be found at the bottom of the village and you'll have to earn the view from the top of the acropolis a bit - the individual stairs are quite long, although the walkway is rather narrower in width, especially if there are tourists streaming in two directions. In addition, there are no railings around the walkway. We therefore recommend you to wear comfortable shoes. Alternatively, you can try a local attraction and be taken up by donkeys led by donkey drivers for 6 Euro. The donkeys use their own trail and a "donkey taxi" is located on the main street of the village.

After this challenging but beautiful walk, a little refreshment in the sea will certainly come in handy. You have several options. On the coast below the acropolis there are two beautiful sandy beaches - the larger Lindos with its gently shelving access and the smaller, quieter Pallas. Further along the coast, you would reach the centre of Lindos, the hotel complexes, where the famous large sand and shingle beach of Vlycha (Vlicha) is located. But if you rather like peace and romance, we would recommend visiting Agios Pavlos (St. Paul's Bay). It's a stunning little bay with a gentle descent, sheltered from the wind by the surrounding rocks. According to the legend, Paul the Apostle landed here in 43 AD, bringing Christianity to Europe. The view of the bay from the top of the acropolis is beautiful. So make sure you spend a whole day in Lindos, you won't regret it.