The uniqueness of the historical evolution and also alone of the character of the Greek island of Santorini lies, in the first row, in the volcanic activity. Because of that (or maybe thanks to that ?) we can admire the oldest sights of this place, including even an important prehistoric site. The sights from moderner history were unfortunately damaged by the big earthquake in 1956. Some of them withstood it, were renovated and thereby preserved also for the next generations. Today Santorini is known as the island of churches, monasteries and chapels. 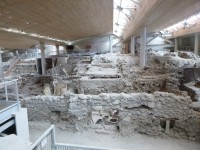 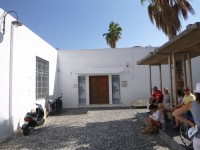 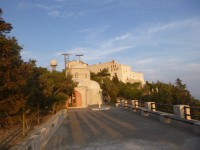 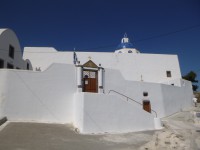 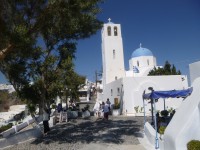 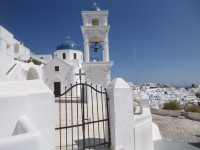 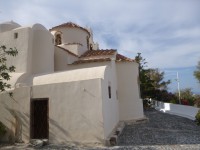 Episkopi Gonias, Church of the Assumption 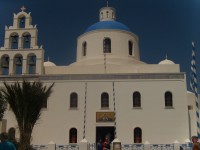 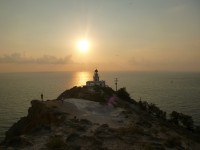 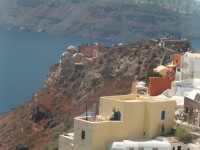 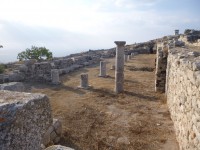 Two significant cultures went down in history of Santorini. First of them was the so-called Minoan culture that inhabited the island already in the prehistoric period, until the massive eruption of the Strongyli volcano ended its rising. The existence and development of the Minoans confirms the large archaeological site of Akrotiri, named after the near Akrotiri village. The volcanic ash and dust covered the city after the eruption, what conserved the place perfectly until 1967, when the Greek archeologist Spyridon Marinatos began to uncover systematically the city again.

The inhabitation of Santorini during the Ancient period is demonstrated by the ruins of Ancient Thera, an old settlement discovered in the Mesa Vouno mountains on the east coast. The city was established by the Spartans in the 9th century BC. During the time the city has started to rise and it has become an important trading centre. Its destiny was full filled in 726 A.D., by a volcano eruption (not surprising). Although the eruption was not that strong, it damaged the city and made the inhabitants to move to the coast because the life there was easier than in the mountains. The artefacts that have been found in the city are placed in the Archaeological Museum of Thera in the capital city of Fira.

The dominant sign of Santorini is the big number of monasteries and churches, which we can find almost on each corner. Most of them are built in the so-called Cycladic style, that means simple white-blue buildings, often having very beautiful bell towers. Nevertheless, each building is somehow special and unique.

The oldest monastery of the island is the monastery of Agios Nikolaos (St. Nicholas), originally founded in Skaros, a medieval city built on an isolated place near the city of Imerovigli. The monastery got its todayÂ´s shape at the beginning of 19th century. Another interesting monastery is called Profitis Ilias (Prophet Elias), which is located on Profitis Ilias, the highest mountain of Santorini, above the village of Pyrgos. The construction of the monastery started in 1771, but the todayÂ´s shape is also from the 19th century.

Beautiful churches can be found almost in every resort. You can visit for example the church of Agios Anastasios, towering over the city of Imerovigli or the Byzantine church Episkopi Gonia, consecrated to Asumption of Virgin Mary and located in the Mesa Gonia village, close to the Kamari resort. A dominating feature of the city of Oia is the orthodox church Panagia Platsani. Oia lies in the north west tip of Santorini and is a very famous place for the possibilities to watch the stunning sunset. The tourists are watching the setting sun for example from the Byzantine castle of Agios Nikolaos (Kasteli).

If you want to connect romance with a little bit of adventure then go to the south west coast of the island, where you can see one of the most beautiful lighthouses of the Cycladic Islands - lighthouse Akrotiri. A special atmosphere does this place have particularly during the sunset.

More tips for interesting trips you can find in the section Trips.