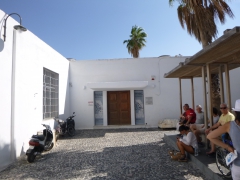 Archaeological Museum of Thera is located in the capital city of Fira in the western part of Santorini and protects many unique artefacts from various historical periods of the island.

Santorini, Archaeological Museum of Thera on the map

Unfortunately, the original first museum of Fira, foundedĀ at the beginning of 20th century, was destroyed by the massive earthquake in 1956. In 1960 a new museum was built to be able to store valuable finds from the excavations made near Ancient Thera, but also from other parts of the island.

Archaeological Museum of Thera maps the history of Santorini since the oldest times until today:

In the first museum premisesĀ several prehistoric exhibitsĀ are being exposed as for example beautiful vases from 20th - 17th century BC which have been discovered in the area of Akrotiri.Ā The second part of the exposition is going to take us to theĀ Ancient period (8th - 4th century BC), represented mainly by the collections of ceramic artefacts from the 6th century BC. Here we can see for example clay figures or vases decorated with geometric patterns.Ā InĀ the open space of the museum there areĀ many statues and other itemsĀ such as memory stones with lettering and big vases with relief. The exposition is finished byĀ articles from the Hellenic and Roman age. VeryĀ impressive is the perfectly preserved 2,3 metres high marble sculpture of a young woman, which was found in Sellada.