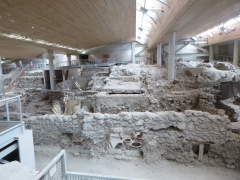 The archaeological site of Akrotiri is a unique and very significant historical place of Santorini. It is located in the southwestern part of the island, approximately 11 km southeast of the capital city of Fira near the Akrotiri village and the famous Red Beach.

The excavations in Akrotiri have proved the existence of one of the most important prehistoric settlements in the Aegean region, coming from the Late Neolithic Period (around 4000 BC). During the Early Bronze Age (around 3000 BC) the settlement has started to grown bigger and in the Late Bronze Age (around 2000-1700 BC) Akrotiri became one of the main cities and harbours in the Aegean Sea.

During the time of its greatest prosperity there was a big city with an elaborated canalization system, multi-level buildings with beautiful wall paintings, big windows as well as furniture and dishes showing the development and prosperity of the city. Even items coming from Greek mainland and other islands like Crete or Dodecanese, but also Syria or Egypt were found inside the buildings. Between the houses narrow cobbled streets were interlacing themselves. The inhabitants were mostly engaged in agriculture, breeding of farm animals, fishing and ship transport, but there were also many builders, artists or beekeepers living in the city. If we see the nice wall paintings and various decorative items, it is obvious, that the locals spent generally a lot of time with art.

Around 1600 BC the ordinary life in the city was interrupted by a strong earthquake, followed by a massive volcano eruption, which is considered to be one of the strongest in worldÂ´s history. The city was covered by volcanic ash what made it to be hidden and conserved perfectly until today. Akrotiri is often being compared to the Roman city of Pompeii, which suffered the same fate in the year 79. Because of that Akrotiri is sometimes called as the "Greek Pompeii", but on the contrary to the Roman Pompeii, the were neither human remains nor jewelleries or other valuables found in Akrotiri, what makes us suggest that the inhabitants were able to escape from the city in time.

As a result of the eruption the life disappeared from Santorini and its surrounding islands. Also, the round shape of the island changed suddenly as there a giant crater arose in the place of the eruption and many parts of the land, belonging to the island before, were separated from it.

The first traces for finding the old buried city appeared at the end of the 19th century. In 1967 the Greek archaeologist Spyridon Marinatos, working for the Archaeological company in Athens, started with systematic excavations to prove the theories of the extinction of a significant Minoan civilization in this locality. After his death in 1974, professor Christos Doumas took over the excavations, which are taking place under his lead until today, bringing remarkable results.

As the original name of the discovered city is not known, the archaeological site was named after the todayÂ´s Akrotiri village, located on a hill above it.

To visit Akrotiri can surely be a very special experience, where you can feel the atmosphere of the ancient times, as you can walk on the old streets and between the houses. Most of the found artefacts were transported to the Prehistoric Thera Museum in Fira, some of them can be seen also in other museums like Archaeological Museum of Thera (also residing in Fira) or in the National archaeological museum in Athens.

Unfortunately, there was an accident after the official opening of the archaeological site for public in 2005, as the roof covering the whole place crashed down and killed one visitor. The place remained closed until April 2012, when it was opened again.

The second most significant historical site of Santorini are the remains of the Ancient city of Thera, located in the Mesa Vouno mountains in the eastern part of the island.

Archaeological Museum of Thera →
back