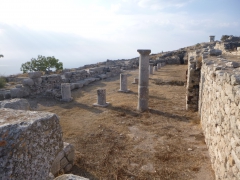 Archaeological site of Ancient Thira is a very significant proof of historical colonization of Santorini. The remains of Ancient Thira are located in the eastern part of the island - east from the Profitis Ilias mountain, on the western slope of Mesa Vouno mountains.

During the 9th century BC the Spartan colonists landed on Santorini and settled down on the Mesa Vouno mountain, where they began to build a new city. They chose a very strategic place for it, as the surrounding rocks could be used as natural fortification and thanks to theô height above sea level they had a good view over the sea and could therefore react quite quickly if there was danger coming from there.ô To honour their king whose name was Theras, they named the city and the island Thera. The city grew up quickly and became soon aô religion and trade centre of the island. The island had its time of prosperity and fame as well as periods of oppression by other nations.ô During the 4th century BC Thera was used by Egypt as naval and military base before the island was conquered by the Romans. The finalô decline of Ancient Thira came at the end of the 3rd century ADô as the people started to move to the coast where the life was easier and more comfortable for them.

The archaeological excavations on Mesa Vouno mountain started in 1896ô under the initiative of the German archaeologist Friedrich Hiller von Gaertringen. A new impulse to the excavations cameô during the year 1961 when the Greek archaeologists found a settlement from the Hellenistic period. There was a main paved street going through the cityô crossed by several smaller streets, as well as a water supply and canalization system. The public buildings were built out of limestone which was originally coming from the mountain. Cemetery, temples, theatre, spa, market (agora) and other public buildings which were discovered here bear witness, that a very sophisticated society emphasizing religion was living here that time. On the other hand, art and education were not supported here that much as the Spartans were quite conservative people. Despite that there were very interesting artefacts found in Ancient Thira, showing, that the region wasô maintaining business relationships also with other Cycladic islands, Greek mainland, Crete and even with North Africaô and was accordingly culturally influenced by these countries. Most of the found things fall into theô Hellenistic and Roman period (3rd century BC - 2nd century AD.

Thanks to the archaeological excavationsô a big part of Ancient Thira has been discoveredô and therefore the visitors canô even todayô enjoy the atmosphere of thisô uniqueô place. One of the favourite stops among the tourists are theô ruins of the small Hellenistic temple of Dionysosô built north of the agora. Its bearing walls and the roof were made out of marble, the rest of the building consisted of the local stones. Here you can adore various sculptures, earthen jars, pots or vases and other artefacts where some of them are also placed in theô Archaeological museum of Theraô in Fira and in theô National archaeological museumô in Athens.

Theô Mesa Vouno mountainô where Ancient Thira is located, separates the holiday resorts of Kamari and Perissa. From Kamari there is a road going until Ancient Thira, therefore it is possible to reach it either by foot or by car. Mountain hiking fans will probably enjoy the small path that goes uphill from Perissa, as it is the only way to get from Perissa to the ancient city.ô Because of its height above the sea level which is 365 metres, the visitors should prepare themselves for aô quite windy weather, but on the other hand they can look forward to aô great view over the Aegean Sea.

If youô like this kind of archaeological excavations you will surely be amazed also by the archaeological site of Akrotiri which is older and where you can see many artefacts dated back to theô prehistoric colonization of Santorini.