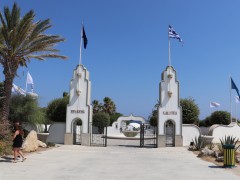 Kalithea Spa is one of the most popular tourist destinations on the island of Rhodes, as visitors can enjoy the thermal springs, which are known for their therapeutic effects. Terme Calitea (as the sign at the entrance proclaims) is located in a beautiful bay, just 9 km from the capital city of Rhodes.

Rhodos, Kalithea Spa on the map

The thermal springs of Kalithea have been known for their therapeutic effects since antiquity and gained great popularity especially at the beginning of the 20th century, when they were used by the Italians. The Italians created a magnificent spa here, which was opened in 1929 and in use until 1967. The complex was designed by the Italian architect Pietro Lombardi, who rebuilt the original spa buildings in an oriental style and whose architectural compositions made him one of the best architects of his time. During this period, the spa attracted visitors from all over the world, including doctors and scientists, to Rhodes.¬†

The springs of Kallithea are said to have beneficial effects on human health, which are mainly attributed to the rocks through which they flow. The springs are not hot, normally reaching a temperature of around 19 ¬įC. The spa describes the water as "cold, hypotonic,¬†slightly radioactive healing water¬†containing sodium and chlorine".

Today, the spa has been completely and modernly renovated (it reopened to the public in 2007) and is able to welcome hundreds of visitors a day during the peak summer season. Although it no longer fulfils its original role as a classic spa, because now it is primarily a popular tourist destination and relaxation area. The unique architecture with pebble stone mosaics, glass domes, a beautiful terrace and a staircase at the entrance completes the local pleasant oriental-style environment.

The charm of this place also lies in the fact, that the spa area is situated in a beautiful bay with a nice, eponymous Kalithea beach, crystal clear water and palm trees. It's no wonder, then, that the spa is also popularly used for a variety of social, cultural and artistic events, including lavish weddings, wedding receptions and film productions. There is also a beautiful restaurant and a nice bar in the area of the spa. The coastline around the spa is also popular among snorkelling enthusiasts.

"Kallithea Springs" (as the baths are usually labelled in the maps and travel guides) are located in the Kallithea Bay, about 9 km south of the capital city of Rhodes, on the northeast coast of the island. The spa belongs to the eponymous tourist resort of Kalithea.