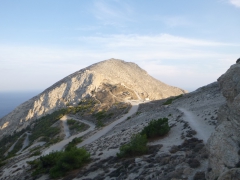 Mesa Vouno mountains spread at the southeast coastÂ of Santorini, near the popular resorts of Perissa and Kamari. The mountain massive is an important archaeological siteÂ and thanks to the amazing view, it is also a frequent target of the tourists.

The Mesa Vouno mountains are especially famous because of theÂ Ancient city of Thera, which was located here in the past. It was founded by theÂ Spartan colonists, who landed on the islandÂ during the 9th century BCÂ and chose this strategic place at the foot of the mountains for founding of the city. The good view over the sea was warning them in time against danger coming from the sea.Â The city was prospering and became a trade and religion centre of the island.

The archaeological excavations, which started here at the end of the 19th century, have revealedÂ even older settlement from the Ancient period. However,Â most of the artefacts come from the Hellenic and Roman ageÂ and show the development of the city and its culture. More information about the history and shape of Ancient Thera can be found in the section Sights - Thera (archaeological site). An entrance fee has to be paid to be able to visit the city ruins andÂ during the last seasons,Â the opening hours have been limited from 8:30 to 14:30, with Monday closed all day.

Mesa VounoÂ separates the two popular holiday resorts of Perissa and Kamari. The picturesque Perissa is especially known for its beautiful beach, which is covered with dark sand and pebbles and washed by crystal clear sea. Many divers and come here to explore the local rich undersea world. Contrary to Perissa, Kamari is much younger, but its beach is as popular as the one in Perissa. You can try out many water sports here or for example hire a boat and discover the beauties of the surrounding coast from the sea.

Thanks to theÂ height above sea level, which is 365 m.a.s.l., the mountains offer the tourists also a very nice view on the wide landscapeÂ and can therefore be an interesting target of a walking trip.Â Footwalks are made from PerissaÂ - You hike on a not really tiring zigzag path, which goes through a valley between the mountains of Mesa Vouno and the highest peak of Santorini Profitis Ilias (Prophet Elijah). The journey takes about one hour and we recommend you to start the trip early in the morning, when the valley is lying in shadow and to have enough water with you.Â From Kamari,Â there is an asphalt road going to the top,Â it is therefore possible to go there by car or other vehicle.

If you climb up to the top, enjoy theÂ deserved amazing view over the surroundings. You can see the close Santorini resorts from here as well as the coasts of this unique volcanic island or the Aegean Sea or the islandÂ´s highest mountain Profitis Ilias with very beautiful monastery located on top of it, today used mainly as a museum and a culture sight.

Tips for trips on Santorini:Â Caldera Boat Trip, Sunset in Oia, Most beautiful beaches of Santorini, Discovering the beauties of the capital city of Fira, Visiting Ancient Thera