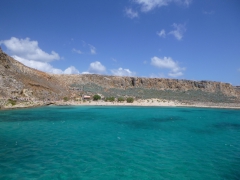 At the very tip of the north western part of Crete theÂ small island of Imeri GramvousaÂ is lying in the sea. It is well-known for the ruins of the old Venetian fortress from the 16th century that can be found on the top of the island.Â The boat trips to the island belong to the most popular tours on Crete.

KrÃ©ta, Gramvousa Island on the map

In fact, there areÂ two small islands called Gramvousa locatedÂ at the western coast of Crete. In the north located Agria Gramvousa or Wild Gramvousa is not very hospitable as it is made of steep rocks and has strong blowing winds. The southern Imeri GramvousaÂ translated as Tamed Gramvousa is more known for the old Venetian fortress that is standing here. The island is often simply called just Gramvousa. In the Ancient times, both of the Gramvousa Islands were known under the name of Korykos, theyÂ got their todayÂ´s names much later.

The fortress was built by the Venetians between the years 1579 â€“ 1584 for a better protection of the island against the Ottoman Turks,Â similar as for example the fortresses of Sitia and Spinalonga. It remained quite long in the Venetian hands until the Neapolitan captain de la Giocca (known as "captain Grambousas") betrayed the Venetians and surrendered the fortress to the Turks for a generous bribe in 1691. Later, the fortress played an important role in the Greek revolution fights for independence against the Turkish supremacy. In 1825, a group of three to four hundred Cretans disguised as Turks and captured the fortress and island of Gramvousa. It is told, that Imeri Gramvousa was the first Cretan land that was liberated from the Turkish domination. However, the Turks were still able to block the supplying roads to Imeri Gramvousa and the Cretan insurgents had to move to piracy to be able to survive. This situation lasted almost three years until the region went under British control.

The fortress has a shape of a triangle where each side has a length of approximately one kilometre. The building is situated in a height of 137 metres above the sea level and offers its visitors a stunning view over the sea and the unique Balos Beach (Balos Lagoon) where a pirateÂ shipwreckÂ can be seen.

Because of its rich fauna and flora the island of Gramvousa is a part of a nature-protected area within Eastern Mediterranean. More than 100 species of birds and more than 400 plant species are living respectively growing on the island and in its neighbourhood whereas the local underwater caves are known for the seals giving birth here. When you look from a boat on the steep cliffs rising out of the see you can make yourself an image of how such an underwater cave looks like because approximately 2Â 000 years ago the western part of Crete rose by around 9 metres and some then underwater caves are uncovered and dry today.

The island of Gramvousa is a common destination of facultative boat trips. The tours usually start in the resort of Kissamos and goes all around the Gramvousa Peninsula. The first stop is the island Imeri Gramvousa where the passengers can walk on a smack pathway up to the fortress or simply stay on the beach and bath in the sea or explore the already mentioned pirate shipwreck. After that, the journey continues to the next stop which is the beautiful Tigani Balos Lagoon where the tourist also can bath in the sea and enjoy the fine sand and shallow turquoise water. There is a small pathway going from the beach to a viewpoint above the lagoon from where the visitors have a stunning view over the whole place.