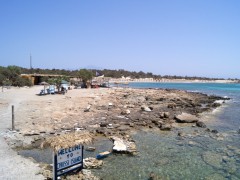 At the south eastern coast of Crete, 15 km south from the popular Ierapetra Resort, the small but very interesting island of Chrisi is located in the Libyan Sea. The “Donkey Island” is a paradise with beautiful white beaches and shining clear water.

Kréta, Chrisi Island on the map

Chrisi, translated as "Golden Island", is more a small and flat island – 5 km long and 1 km wide, with a height above the sea level of maximum 31 metres (little hill of Kefala). The name of the island points at its wonderful beaches with fine golden sand. Together with the crystal-clear and blue sea, they create a colourful contrast whereby the island is called “Cretan Caribic” among the tourists. Another name for the island also is Gaidouronisi or "Donkey Island".

The island of Chrisi has much more to offer its visitors, especially its natural beauties and monuments, but keep on mind that you are finding yourself in a protected nature reserve because the island is participating in the nature protecting programme of Natura 2000.

In the middle of the island, a wide cedar forest with approximately 5000 trees of an average age of more than 200 years is stretching. We can even find trees here that are higher than 10 metres and older than 300 years. You should definitely take a walk through this forest and take in its scent, but try to stay on the beaten tracks and not to enter the places between the trees to much because in the last years, erosion occurs on the soil around the roots as the result of undisciplined and often camping tourists, what makes the trees to dry and to die.

From the small harbour close to the Vlychadia Beach which is located in the south of the island, a pathway is going through the forest until the Belegrina Beach in the north of the island. On the Belegrina Beach and its neighbouring Golden Beach, you will have a unique possibility to see many fossilized shells formed into large sandstone blocks whose age is estimated to be several thousands of years. Just remember that on the island, it is prohibited to take away any kind of natural “souvenirs” including these fossils or even sand.

The Golden Beach and the beach of Belegrina are considered to be the most beautiful beaches of the island where most of the visitors are spending their time. We can find several tavernas and bars including sunbeds with umbrellas here. And if you do not find a free sunbed you can easily lie directly on the sand because it is really very smooth and soft.

Sights on the Chrisi Island

In the western part of the island, we can find a small Greek Orthodox church of Agios Nikolaos (St. Nicolas) from the 13th century. Close to the church, an old, but still functioning lighthouse powered by solar energy is standing. In the sea, several rests of old breakwaters are visible. The east of the island is interesting because of the salty lake which is dried to the bottom during the summer months, but filled by water during the winter time. For this reason, every year, the lake becomes a temporary home for migrating birds.

Ruins of the Minoan and Roman settlements with recognizable building foundations and tombs were discovered close to the church of Agios Nikolaos and the old lighthouse.

A tip for a trip - A boat trip to Chrisi Island

A boat trip to Chrisi is an interesting tip for a trip, especially if you want to spend your holidays on the south eastern coast of Crete. Boats going to the Donkey Island start in the morning from the harbour of Ierapetra and return back in the afternoon. Chrisi Island is permanent uninhabited and it is prohibited to stay overnight or to camp here.

Close to the east coast of Chrisi, the small rocky Mikronissi Island which became a home for thousands of seagulls is lying.