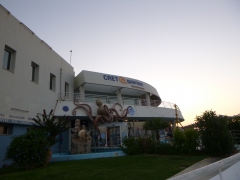 The big sea aquarium Cretaquarium or also Thalassokosmos (greek "sea world"), belongs to the biggest in Europe and is a home for approx. 200 various sea-animals, which are typical for the area of the Mediterranean Sea. The aquarium can be found 15 km east from the capital city of Heraklion.

The idea of building the first sea aquarium in Greece was turned into reality by the employees of the Institute of Marine Biology of Crete (IMBC) who used for this purpose the former military base of the USA which is located on Crete┬┤s north coast, close to the city of Gournes. For the first time the aquarium was opened for the public in 2005 and since then it is permanently being upgraded and innovated and today it is considered to be one of the biggest aquariums in Europe. Today, it is maintained by the Hellenic Centre for Marine Research (HCMR), which has the main target to popularize the knowledge about the sea world, especially in the Mediterranean Sea and in the area of the Greek islands.

The main part of the aquarium Thalassokosmos is made by 60 pools of various sizes where more than two thousand sea animals are living and representing approx. 200 various animal species, that have been discovered in the region of the Mediterranean Sea (above all in the Cretan and Lybian Sea). During the realization of the aquarium, the specialists tried to imitate as natural conditions similar to a sea, in which the sea animals live, as possible. Therefor we can see here a true copy of the cliffs in Matala or the underwater terrain of the famous ŌĆ£palm beachŌĆØ of Vai.

If you once stay in this region of Crete, visit the Seaworld Thalassokosmos because it is really worth it. The huge amount of various living things, that can be seen here, is fascinating ŌĆō coloured tropical fishes, small seahorses, crayfish, transparent jellyfish or giant Caretta turtles. The biggest attraction of the aquarium is a big shark, but the children will probably be more fascinated by the clownfish (anemonefish) which they know as the fish Nemo from the movie Finding Nemo. On each pool, there is a multilingual information panel available as well as the possibility of using an audio guide.

Except private and group tours, the company Cret-Aquarium is also organizing education programmes for schools and public and taking care of sick and injured animals. There is a regular bus connection from the capital city of Heraklion as well as from the close holiday resort Hersonissos - Stalis ŌĆō Malia to Cretaquarium, but the place can be also easily reached by car.

Official website of the aquarium: www.cretaquarium.gr (Here you can find out the information about the actual opening times and ticket prices)