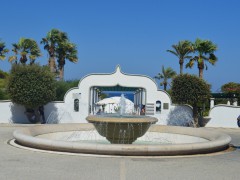 Turkish rule lasted until 1912, when the island of Rhodes was occupied by the Italians. Despite the gradual change in their attitude towards the local population caused by the onset of expansionist policies, they devoted considerable effort to restoring the monuments from the time of the Knights of St. John and to modernising the infrastructure. Rhodes has thus once again become attractive to tourists. After the end of World War II, the island was administered by the British administration until 1948, when Rhodes became part of Greece.

During the Italo-Turkish War, in 1912, the Italians took over the island of Rhodes with the help of the native Greeks. Together with Rhodes, they took over the other Dodecanese islands. Initially, the Italians treated the local population with consideration and friendliness, expecting a rapid Italian-Greek union. However, due to the rise of fascism in Italy and the adoption of a policy of expansion, the Italians lost sympathy for Greek efforts at self-determination. Soon there was armed resistance on the part of the local Greeks, but this led to nothing. The Italians remained in power.

However, the Italians did not let Rhodes continue to decline, instead they devoted a lot of attention and funding to the restoration of historical monuments and the introduction of modern features. During the Italian rule, the island saw the construction of an efficient irrigation system, modern sewage systems and the introduction of electricity to the more remote areas. As far as the preservation of historical monuments is concerned, the Italians focused exclusively on the Johannite period. They had the Turkish buildings built around the walls demolished, reconstructed the Grand Master's Palace (removing all modifications from the Turkish era), St. John's Church and the historic harbour. The Palace of the Grand Masters became the summer residence of Italian Prime Minister and Fascist leader Benito Mussolini.

After the fall of the dictator Mussolini in 1943, the military strongholds of the island fell into the hands of German troops. With the end of the Second World War, all the Dodecanese islands came under British administration until March 1948, when Rhodes became part of Greece.

When the Italians took control of Rhodes, they immediately began restoring and building. They introduced an efficient irrigation system and modern sewage system to the island and built extensive infrastructure. They also built a new harbour and designed new town plans. Their main concern was to preserve the remnants of the chivalric era, and the Palace of the Grand Masters in particular underwent major changes, with all Ottoman alterations removed and the Palace restored to its medieval appearance. The seaside thermal baths of Kalithea have also been extensively renovated under the supervision of Italian builders.