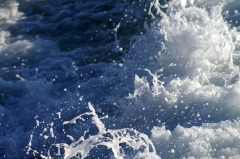 According to ancient myths, the origin of Rhodes is linked to the story of the gods fighting the mighty Titans for control over the world.

After a great battle, the gods, led by Zeus, defeated the Titans. Zeus then decided to divide the Earth among the Olympian gods. Only the sun god, Helios, was forgottenÂ because while Zeus was dividing the earth, he was wandering the sky with his sun chariot. When he returned and found, that he was the only one who had not received any part, he also claimed his reward. Zeus was sympathetic to his complaints, but he could not take from the other gods what he had given them anymore. Therefore, Helios enforced a promise from Zeus and the other gods, that the land, that would emerge from the sea would be his. To this the other gods agreed. Suddenly an island emerged from the blue sea, which Helios illuminated with his brightnessÂ and it became the most beautiful island in the Aegean Sea, with more than 270 days of sunshine a year.