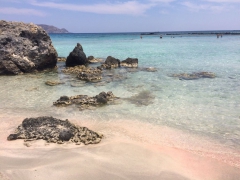 The beautiful sandy Elafonissi Lagoon lies in the western part of Crete, approximately 210 km southwest from the capital city of Heraklion (Iraklion). The beach is famous for its pinkish coloured sand.

Kr├®ta, Elafonissi on the map

Elafonissi Beach is traditionally rated as one of the most beautiful beaches of Crete and together with the small Elafonissi islet, which is located opposite of the beach, it creates the longest beach of western Crete. It is not a typical beach, but more a long sandy shore, that connects the Elafonissi Island with the Cretan Mainland. This very unique place can be seen in the southwestern tip of the island, approx. 82 km southwest from the city of Chania.

The Elafonissi Island, which is connected with the mainland by a shallow shore, is a protected nature reservation included in the nature protecting programme Natura 2000. It is famous for the unique ecosystem and for the pinkish colour of the sand, caused by the crushed shells. The island is a home of several endangered plants and animals, such as the Caretta-caretta Turtles, it is therefore strictly forbidden to take anything away from here ŌĆō shells, plants, sand etc.

On the contrary the beautiful sandy lagoon opposite of the island is fully equipped by sunbeds, umbrellas, tavernas and bars. The sea in the whole lagoon is very shallow and if the weather is good, it is sometimes even possible to reach the Elafonisi Islet by foot. The white-pinkish sand on both sides of the lagoon, picturesque palm groves and turquoise sea are giving this place an exotic look.

There is a memorial standing close to the parking place, which reminds on a tragedy that happened here on Easter Sunday 1824. Hundreds of Greek women and children hid on the Elafonisi Island during the Turkish occupation, hoping for a rescue ship which would take them to a safe place. Unfortunately, they were revealed by the Turks and killed with no mercy (allegedly around 600 women and children and 40 Cretan warriors).

On the island then we can find a big wooden cross, reminding on an accident from February 1907, when the steam ship ŌĆ£ImperatrixŌĆØ crashed into cliffs during a heavy storm. 38 people died and were buried on the island. (140 passengers were on board). To avoid similar accidents in the future a lighthouse was built on the island. The wreck of Imoeratrix is still lying on the bottom of the sea, close to the cliffs.

The island was also inhabited by the pirates in the past, what is even reflected in its name because "Elafonissi" means translated ŌĆ£Treasure IslandŌĆØ and refers to a legend, that the pirates hid a big treasure here.

And finally, there is an Orthodox Christian women monastery of Chrysoskalitissa from the 17th century located approximately 5 km north from Elafonissi. The monastery was built on a high rock falling into the sea. There is a legend that the last step leading to the monastery is made out of gold, but this can be seen just by those who truly believe in God.

Rating of the Elafonissi Beach

The fact, that the beach of Elafonisi is one of the most popular beaches on Crete has also some drawbacks as it is overcrowded by tourists during the main season. If you want to enjoy this place in a calm atmosphere of a sunrise or sunset, you have to come very early in the morning or late in the afternoon. In the western part of the island, there are also several smaller remote bays providing their visitors more privacy and peace.

By all odds, the beach of Elafonisi is a really beautiful, unique place and thanks to the shallow sea is it suitable for families with small children.