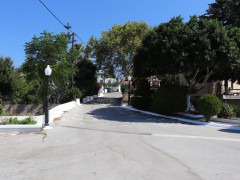 The small, traditional village of Istrios is located inland, in the southern part of the Greek island of Rhodes, about 80 km southwest of the capital city. The village is situated in a beautiful setting of the surrounding unspoilt nature.

Rhodos, Istrios on the map

The beauty and attractions of the village of Istrios

Istrios is a picturesque village situated in the hilly landscape of the interior of Rhodes, on the road between the other small villages of Apolakkia, Vati and Agios Isidoros. The village of Istrios is predominantly agricultural, as evidenced by the local olive groves and wine fields that can be seen around the village on arrival.

The village of Istrios is made up of a few small houses, narrow streets and a large, quiet square that shows visitors the friendly and hospitable face of the locals. At the end of the village we can findÂ the 17th century chapel of St. Merkourios, built on the ruins of an older Byzantine church. Saint Merkourios is the saintÂ patron of Istrios and every year on 15th of August a festival is held in his honour, when locals gather in the village square to play traditional Greek songs on lyres and violins and to enjoy a variety of Greek specialities.

As you walk through the village, you may also come across the small chapel of Agios Athanasios, where locals sit and chat in the shade of the mature trees.

Who is Istrios suitable for?

The pride of this area is especially the beautiful surrounding nature. The village of Istrios is set in a pleasant environment of pine forests, which are very rich in flora and fauna and almost untouched by humans. The unique Dama-Dama deer lives here. If you follow the arrows to "Kipolistis", you will come through the pine forest to beautiful waterfalls.

The area from Istrios to the neighbouring resort of Profilia is protected under the European Natura 2000 network. To the west of the village is the large artificial lake Apolakkia (named after the nearby village of Apolakkia), which, apart from serving mainly as a dam, is also an important wetland and a refuge for migratory birds.

The village of Istrios and its surroundings are thus an ideal destination for those who love nature and want to escape for a while the hustle and bustle of the big tourist resorts on the coast.

Istrios and other tips for trips nearby

Towards the west coast, the ruins of the Johannite castle of Monolithos rise on a high cliff, offering a magnificent view of the island's interior and the wide Mediterranean Sea. To the east of Istrios, on the other hand, are the ruins of another medieval castle, Asklipio.

If you drive towards the village of Laerma, be sure to stop at the Moni Thari Monastery, which stands in a beautiful landscape surrounded by wild nature. The monastery, dedicated to the archangel Michael, dates back to the 12th century, but is still very well preserved and inhabited by monks.

However, for a more touristy environment you have to look towards the east coast of the island, where you can find, for example, the resort of Kiotari, the beach of Gennadi (famous for its beach discos and parties) or the famous tourist resort of Lindos, near which the original ancient village of Lindos (now a UNESCO World Heritage Site) has been preserved.