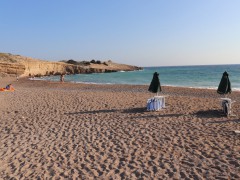 The beautiful and quiet sand and shingle beach of Fourni is located in the southwestern part of the Greek island of Rhodes, about 76 km southwest of the capital city. The simple amenities of the beach are pleasant and do not interfere with the surrounding wildlife.

Rhodos, Fourni on the map

Fourni Beach is located near the village of Monolithos and directly below the ruins of the Johanniter castle of Monolithos. The beach can be reached by the same road as the castle of Monolithos, just before the castle you must not miss the signpost to the left for Fourni Beach. However, the beach can only be reached by car, as the road down to the coast is very steep and full of serpentines. On the other hand, the poorer access to the beach has its advantage, namely that even in the main tourist season the beach is not crowded.

Fourni beach is situated in a small cove bordered on both sides by rocks and its surface is a mixture of sand and coloured pebbles. Fourni is characterised by its tranquillity, privacy and wild nature. If you walk to the edges of the beach, you will see interesting rock formations against which the sea waves crash and further afield you can discover other tiny coves.

Due to the pebbly bottom and larger waves, the water is not ideal for smaller children.

Fourni is a lightly organised beach with a mobile canteen offering chilled drinks and snacks, a few umbrellas and sunbeds, as well as toilet and shower facilities. There is also a small, free car parking place next to the beach.