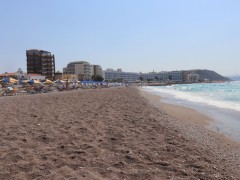 The sand and shingle beach of Akti Miaouli is located on the northern tip of the Greek island of Rhodes, direct atÂ the capital city of Rhodes.

Akti Miaouli Beach is located on the northwest coast of the capital city of Rhodes, a short walk from the centre. The surface of the beach is a mixture of sand and grey pebbles, but in some places the seabed drops quite steeply. As the beach is on the western side of the island, the wind is strong here and producesÂ oftenÂ large waves. The locals sometimes call the beach "Windy beach".

Akti Miaouli is an organised beach with sunbeds, umbrellas and social facilities.