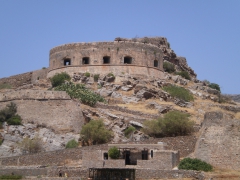 The old Venetian fortress of Spinalonga was built on a small island at the north eastern coast of Crete. Its main task was to protect the close harbour of Elounda and through the years, it earned the title “impregnable”.

Kréta, Spinalonga Fortress on the map

Peninsula and Island of Spinalonga

In the Mirabello Bay, close to the port of Elounda and north from the harbour city of Agios Nikolaos, right two islands or more precisely peninsulas of Spinalonga are lying.

The smaller island “Small Spinalonga” (formerly called Kalydon) with the ruins of the Venetian fortress of Spinalonga was also a peninsula in the past. At the beginning of the 16th century, the Venetians blowed up the rock dike which was connecting the place with the mainland and built the massive fortress on the island. Since that time, the island can be reached just by boat.

The bigger peninsula “Big Spinalonga” is connected with the mainland by a dam and you can reach it by foot as well as by car. The peninsula is permanently uninhabited, but it has several beautiful view points and beaches and especially the dam itself is worth a walk. On the left side of the dam, an old windmill is standing and close to it there are two more. When the sea is calm you also can see the ruins of the sunken ancient city of Olous, which disappeared under the sea probably as a result of landslides or earthquakes.

The ruins of the Venetian fortress which can be seen on the island today are from the end of the 16th century. The fortification, strengthened by half-circle bastions with canons, served above all as protection of the bay with Elounda Harbour and of the Cretan coast against the attacks of pirates and Ottomans.

Together with the fortresses of Souda and Gramvousa which are located in the western part of Crete, Spinalonga Fortress was considered to be impregnable and long after Crete was conquered by the Ottomans, they remained under Venetian rule. Also, several freedom fighter leaders against the Ottoman reign took refuge in the fortresses and used them as their fighting bases. Finally, in 1715 also the famous Spinalonga Fortress fell and was released by a deal to the hands of the Turks (since the first blockade, the fortress resisted enemy attacks for 70 years).

The last and also the saddest chapter of the Spinalonga island happened after the Turks withdraw from Crete in 1905 when a leprosarium was established here. After Crete broke loose from the Ottoman influence, most of the Turks left the country, but not the island of Spinalonga. During the Turkish rule, many of Turks settled down on the island and got rich from smuggling. Of course, they did not want to quit this comfort life. The government of Crete responded on their resistance by declaring Spinalonga a centre for lepers. This made the Turkish people leave the island on their own accord.

At that time, leprosy was considered to be an uncurable sickness and despite the island was introduced as “curing centre” in fact, it was a place where the ill people were placed for the last phases of their lives. They could not leave the island anymore and the life on the small and rocky island was very hard indeed for the lepers because there are neither sources of drinking water nor fertile soil. The residents were absolutely dependent from the outside help, especially from the drinking water and food supplies. Also, their dwellings could not be called sufficient as they only had just perimeter walls and often damaged roof.

The centre was primarily open just for lepers from Crete, but since 1913, it was already used by sick people from all Greece. This resulted a rapid increase of the number of residents on the island who formed an own society with shops, tavernas or school here. Namely, there were also handy craftsmen and educated people in this bigger wave of immigrants who did not want just to live in miserable conditions and die in pain and poorness one day. They even founded a small quarry on the island, managed to make the Turkish rain water roof collecting system to work again and built also a bath to be able to have a regular hygiene.

The leprosarium on Spinalonga was isolated until 1957. From this year, the lepers could be placed into the hospitals on the mainland.

The ruins of the fortress remained preserved quite well until nowadays and so you can see the rests of two fortified zones where the first copies the coastline and the second goes along the slopes above it. From the Venetian period, also water containers, garrison houses or the remains of the church of St. Nicholas (Agios Nikolaos) remained preserved and to that, we can also see buildings from the Turkish period and facilities of the lepers.

Because of the walls and rocky coastline, there no places for bathing in the sea. The only beach on the island is the small pebbly beach of Spinalonga which is located right next to the landing place.

As it was already mentioned at the beginning of the article, the island with the fortress of Spinalonga can be reached just by boat. The best way is to go on board in one of the harbours of Agios Nikolaos, Elounda or in the small fishermen´s village of Plaka which lies only 300 metres from the island.

← Koules Fortress (Heraklion) Windmills on the Lassithi Plateau →
back