Windmills on the Lassithi Plateau - Crete 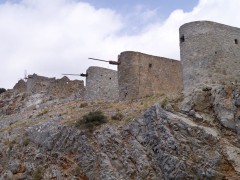 Lassithi Pateau is a wide mountain plain lying in the eastern inland of the Greek island of Crete. When driving through the mountain pass you will see big stony windmills from the Venetian era and on the plateau itself, also then rests of small windmills with linen wings.

Kr├®ta, Windmills on the Lassithi Plateau on the map

Lassithi Plateau and other plateaus on Crete

Crete is a very mountainous island, but we can find also some mountain plains here which belong together with the lowlands to the most fertile regions on the island. The biggest plain is named Lassithi or also Lassithi Plateau and has an area of more than 60 km┬▓. It is a flat territory in the middle of the Dikti Mountains, in the eastern part of Crete┬┤s inland placed under the administration of the Lassithi regional unit.

Lassithi Plateau got its name after the east Cretan city of Sithia which however lies much eastern than the plateau itself. By the addition of the prefix La Sithia was resulted whereby the name of Lasithi (or also Lassithi) became common. This happened during the Venetian rule.

But there are also more mountain plains on Crete as for example the plateau of Omalos, lying in the Lefka Ori Mountains in the western part of the island or the Nida Plateau which can be found in the central mountains of Ida.

Lassithi Plateau and the windmills

Thanks to the rich groundwater reserve which forms itself in spring here when the snow on the surrounding mountains is melting, Lassithi Plateau belongs to the most fertile regions of Crete. And exactly for pumping the groundwater and following irrigation of the local fields a huge number of beautiful windmills powered by the energy of the so-called ŌĆ£northern windsŌĆØ was serving. And the amount of the windmills must have been huge indeed because the region owes them the designation ŌĆ£the land of thousand windmillsŌĆØ. Today, the old windmills can be seen just exceptionally as they were replaced by motor pumps from large part.

There are two driveable and asphalted main roads going to Lassithi Plateau. One of them goes from the east, in the direction from Agios Nikolaos Resort, over the inland villages of Zenia and Mesa Potami. The second route leads from the popular north coast resorts of Hersonissos, Stalis and Malia. During this northern journey you can also visit Kera Kardiotissa women monastery and hear the legend of the miraculous icon of Virgin Mary. Other roads which are going to Lassithi Plateau are not maintained and quite difficult. For this reason, it is not recommended to drive on them with rented cars.

When driving the road from the north, we can also see the rests of the huge Venetian windmills. They stand by the road in the mountain pass of Ambelos Afhin, just before the entry on the tableland Lassithi. They are massive stone constructions and despite the biggest windmills are not original, at least they can help you to make yourself a better imagination of how did it look like here in the time of the Venetians. In the mountain pass there is also a restaurant and a small souvenir shop.

The surroundings of Lassithi Plateau

The plateau itself is covered by a number of smaller and bigger fields with various agricultural products including olive groves. Sometimes, we can also see old windmills with linen wings, where some are still working, but most of them serve only as an attraction for the tourists.

A road leads around the whole plateau, you can therefore explore it nicely all around. The way goes through small inland villages where one can enjoy rest and the true Greek atmosphere. Nevertheless, also here the locals got already used to the tourists and therefore you can buy their handmade products or other souvenirs here, but their main livelihood still remains agriculture.

Close to the plateau there are also several orthodox churches and nature attractions located. One can stop at the men monastery of Moni Vidianis which is, especially in summer, put into colourful flowers. Above the village of Psychro the stalactite cave of Dikteon Andron (shortly ŌĆ£DiktiŌĆØ), one of the mythical caves where the Greek God Zeus should be born and hiding from his father Kronus, is located. The Titan Rhea hid his son Zeus from his father Kronos here (after another legend, the birthplace of Zeus was a cave in the Cretan Ida Mountains).