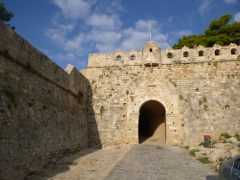 The big Venetian fortress of Fortezza is one of the dominants of the beautiful historical city of Rethymno which is located at the north coast of Crete. Despite the fortress was well equipped it did not fulfill itsÂ military protective roleÂ very successfully.

The Fortezza Fortress comes from the 16th century and belongs to the biggest fortresses of the Venetian era in all Greece. It stands in the western part of the regional city of Rethymno, on the rocky hill called Paleokastro whereÂ an acropolis dedicated to the goddess Artemis was standing here during the times of ancient Rethymno.

The fortress has a shape of a star with three entrance gates and four defensive bastions along its perimeter (St. Lucas Bastion, St. Elias Bastion, St. Paul Bastion and St. Nicholas Bastion). The walls of the fortress were already built with consideration of the invention of gunpowder and therefore they are quite strong with polygonal floor plan and slightly sloping inwards. However, the defendingÂ possibilities of theÂ bastions were very limited and this for several reasons â€“ the primary problems were lack of space and the rocky subsoil of the hill which was limiting the whole construction and did not allowÂ to dig a water ditch around the fortress. The inadequacies of the fortress became apparent during the Turkish occupation when the fortress was captured quickly (it is told, that it was also with the contribution of cholera epidemy inside the fortress).

On the contrary, the inner space of the fortress was well-elaborated and detailed planned. We could find accommodation houses for the soldiers, armory, food stores, drink water containers or horse stables here. There were also civil buildingsÂ inside the fortress as town houses, church or hospital because it was built to be able to protect all the residents of the city in case of an emergency.

During the Turkish rule, the original catholic church was rebuilt into the SultanÂ Ibrahim Khan Mosque with golden roof, but later, the small church of St. Catherine was built next to the mosque.

The fights during the Turkish and later also Nazi occupation damaged the fortress heavily, whereÂ just the surrounding walls and the ruins of some buildings as armory, stores or the governorÂ´s house remained preserved until today. Very well-preserved remained also the Ibrahim Mosque and the St. Catherine Church. The armory was rebuilt into a two-storey house with interior nicely decorated by arches where various cultural events and exhibitions are taking place. In the open space Erofili theatre, concerts and theatre plays are regularly being played during the summer.