To Greece by plane

Some tips how to travel cheap to Greece 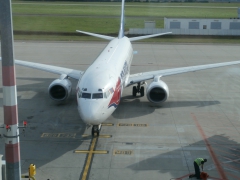 Do you like to travel, but instead of organized and often also expensive holiday trips of travel agencies, you rather prefer some adventures and trips according to your own ideas? Money can be saved already on travel. Some people do not like going on holiday by their own car or to spend long time in train or bus. Is it then possible to travel cheap to Greece by plane ?

If you have enough patience and know where to search, you can find quite cheap flights, at least within Europe,as the european low-cost airline market is very rich. The difference between the low cost airlines and the classical ones is, that you pay primary just for the transport to the choosen destination. There are no comfort classes in the plane and also for the food and refreshment you pay extra on board.Â  Every low cost airline has its own webpage, where various flights are offered months ahead, which oneÂ´s prices are changing according to the date and utilization. Also the flight connections between each country have a different price, what makes it possible to get a flight from Prague in Czech Republic to Corfu in Greece for 300 Euro and from Bratislava in Slowakia to Corfu for 60 Euro in the same time period. It is therefore possible to fly quite cheap. The most favourite searched low-cost airline is the Irish Ryanair (www.ryanair.com), which according to statistics, transported the most people within Europe in the year 2017, about 116 millions. Another airline with many bases inside, but also outside of Europe, is the Hungarian Wizz Air (www.wizzair.com). Most of the european countries have their own low cost airline. See the list of low cost airlines.

Before we start to search for a cheap flight to the choosen destination, it is good to find out, which airlines are flying regularly to the concrete airports. See a simple example. If somebody wants to travel e.g. to Corfu, it is smart to visit first the official websites of the airport of Corfu (www.cfu-airport.gr), where the list of the airlines, flying there, is available. After that, the search for the ideal connection, can be started.Â

LetÂ´s have a look on a concrete example of a search for a cheap flight to Corfu and back of September 2017. On the websites of Ryanair, we choose Corfu as destination. By clicking on it, all available flights from and to Corfu will be displayed automatically. From Czech Republic, it is quite easy to reach other European countries and their airports cheaply by bus. (e.g. StudentAgency). Now I am searching from a position of a Czech, living near to the city of Brno, for as cheap as possible flight to Corfu - concerning the price of the flight itself and also the transport to the airport. There are a lot of possibilities. Sometimes, it is cheaper to buy a return ticket, another time, it is better to combine several one-way tickets together. Unfortunately, there is no connection to Greece from Czech Republic, but from Slowakia there is. Therefore I can have a return ticket from Bratislava to Corfu, in the time period of 8.9.-15.9, for 230 Euro. In addition, the price of the bus transport from Czech Republic - BrnoÂ toÂ Slowakia - Bratislava and back, which is around 12 Euro, what makes a total price of 242 Euro. For some of us, this could be already an acceptable amount, for others, it is still too much money and so they keep on searching. LetÂ´s try to depart to Corfu from Poland and return via Slowakia in the time period of 11.9.-22.9. The result is a one-way ticket from Katowice to Corfu for 52 Euro, combined with another one-way ticket from Corfu to Bratislava for 130 Euro, making 182 Euro. After adding the prices of bus travels from Czech Republic - Brno to Poland - Katowice for 8 Euro and later from Slowakia - BratislavaÂ back to Czech Republic - Brno for 6 Euro, we get the total amount of 196 Euro, with 46 Euro saved. In this way, the search goes on, until everybody has found his ideal flight.Â

Those, who donÂ´t have the patience resp. enough time for this kind of searching, can use special airfare search engines, where all available flights of all airlines in one time period, are compared, with a possibility of direct purchase. It is just important to know, that because of arranging the flights by these engines, the prices of the single tickets are little higher, than of the original ones. Good luck in your searching !

← If a blue flag is fluttering on the beach... To Greece by car →
back