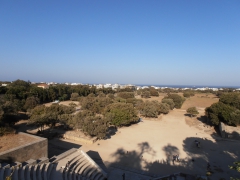 Above the capital city of Rhodes, the hill of Monte Smith risesô and it was right here on this hill where a breathtaking acropolis with many beautiful buildings stood in the times of ancient Greece.

Rhodos, Acropolis of Rhodes on the map

The Acropolis of Rhodes was built between 300 and 200 BC and was one of the most elaborate Greek acropolises in antiquity, with many admired structures. Unfortunately, most of these monuments have not survived, so we need to use our imagination to appreciate the original significance and grandeur of the site today. However, thanks to archaeological excavations and the discovery of fragments, some of the buildings could be at least partially restored.

The Acropolis of Rhodes is one of the most popular tourist destinations on the island of Rhodesô and visitors are free to wander around and view the remains of buildings from the Hellenistic and Late Hellenistic periods. An interesting feature of the Acropolis of Rhodes is that, unlike most other ancient acropolises in Greece, this one was not fortified. Sanctuaries, large temple spaces and public buildings were built on the Rhodes Acropolis. The buildings were strategically placed on steep rock terraces.

Highlights of the Acropolis of Rhodes

One of the most famous monuments of the Acropolis of Rhodes are the remains of the magnificent Temple of Apollo, which stands in the southern part of the hill. At night, its remains are beautifully illuminated, making it a popular subject for photographs and pictures of Rhodes. Unfortunately, only the ruins of the temple remain, which is why this building has been partially archaeologically reconstructed. The Temple of Apollo was built in the east-west orientation and was dominated by tall Doric columns. Celebrations in honour of the sun god Helios were held in front of the temple. It is said that the temple was destroyed in the same earthquake as the Colossus of Rhodes. And although the Temple of Apollo is much smaller compared to the other temples that were also located here, it has become a symbol of the Acropolis of Rhodes.

Beneath the temple lies an amphitheatre (odeon), built of marble and capable of holding about 800 spectators. According to surviving information, theatrical and musical performances, as well as rhetoric classes for the most influential Rhodians were held here. The amphitheatre has been preserved in a relatively good condition, but it has also been partially renovated and continues to impress visitors with its acoustics. If you have the courage, try to stand in the middle of it and say something to the others.

The foundations of a gymnasium and a library containing important rhetorical works have been uncovered close to the odeon.

On the northern edge of the Acropolis is the temple of Athena and Zeus. It was also built in an east-west orientation like the temple of Apollo and was even larger. Its monumentality is evidenced by the remains of four huge temple column foundations and the surviving part of the so-called architrave. The Temple of Athena and Zeus was the place where the Rhodians kept their most important interstate treaties.

The so-called "Nymphaia" consisted of four underground, cavernous rooms that were connected by passageways and a large opening in the central part of the roof. The Nymphaia was used for worship and rest.

In the southeastern part of the hill,ô the largest monument of the Rhodes Acropolis is located, namely the ancient stadiumô which reaches 210 metres in length. After restoration, you can find here several seats for spectators and places for officials. The stadium is still in use on certain occasions. To the east of the stadium used to be a gym.

The Monte Smith hill got its name in a strange way. It is said to be named after British admiral William Sidney Smith, who used the site as an observation post for French naval activities in North Africa during the Napoleonic Wars. Before admiral Smith named it after himself, the hill was called Agios Stûˋphanos.

The reconstruction of the monuments on the Acropolis began thanks to the Italiansô who occupied the Dodecanese-Islands in 1912 and continued under their direction until 1945. After World War II, the excavation and restoration works were taken over by the Greek Archaeological Authority. To this day, however, the entire Acropolis has not been uncovered.

The Acropolis is located on the southwestern outskirts of the capital city of Rhodes, about 2 km from the Old Town. The Acropolis can be reached by car (there is a public parking place), a public bus will also take you there or you can easily walk there. It is recommended to take enough of liquids with you, as there are no refreshment facilities near the Acropolis.

In 2019, the local monuments were undergoing renovations (the Temple of Apollo was surrounded by scaffolding) and admission to the Acropolis was free.

← Acropolis of Lindos Archaeological site of Filerimos →
back