Acropolis of Lindos - Island of Rhodes 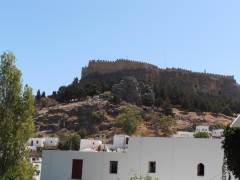 For many visitors, Lindos is the most impressive archaeological site on the island of Rhodes. The ancient acropolis with the temple of the goddess Athena towering on top of the hill, the massive Johannite walls below and the original fishing village in the sub-castle below - different periods and different styles, but together they form a pleasant whole.

Rhodos, Acropolis of Lindos on the map

The Acropolis is dominated by the Temple of Athena of Lindos, built by the ruler Cleobulos in the 6th century BC. Under the reign of Cleobulus, the city of Lindos flourished and although the ruler was later described as a tyrant, he is also counted among the Seven Wise Men of antiquity. The temple of the goddess Athena quickly gained great popularity among the faithful and became one of the most important religious centres on the island.

The remains of the temple have been preserved to this day and will provide a beautiful backdrop for your holiday snapshots. In particular, the stairs leading up to the temple, which are over twenty metres wide and the preserved column hall of some twenty Doric columns are very popular. Originally, the entire stoa consisted of 42 columns and measured 87 metres. You can also enjoy the view of the distant surroundings that the 117 metre high rock offers. For example, the view of St. Paul's Bay is very romantic.

In order to be able to climb to the very top of the acropolis and see this beauty, new steps were built just outside the walls. But on the left side of them you can see the remains of the ancient stairs and, a little higher up, the stairs from the Knight Period. Your guide will probably also draw your attention to the near life size relief of the Greek trireme (warship), which was carved into the rock in honour of Admiral Hegesander. You will find it at the top of the staircase.

The "white town" of Lindos, as it is called because of the white houses in the village below, together with the Johannite Fortress and the impressive acropolis have a firm place on the UNESCO list of monuments. Many of the original building elements from different historical periods have been relatively well preserved and ongoing archaeological excavations are uncovering more. There is also an interesting attraction associated with Lindos - the so-called donkey taxi service, where you can be taken up on the back of a donkey.

The popular tourist resort of Lindos is then right on the coast, about 2 km from the old village of Lindos.

Acropolis of Rhodes →
back