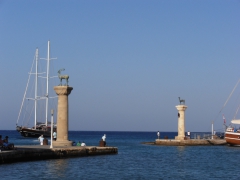 The city of Rhodes is the capital of the Greek island of Rhodes and lies at the northern tip of the island. An ancient city with a rich and interesting past and a large number of preserved historical monuments on the one hand and a very lively centre, the "beating heart of the island" and a modern city with hotels and shopping centres on the other. All this characterises the city of Rhodes.

Rhodos, Rhodes (city) on the map

City of Rhodes - its history and present

In the period of Ancient Greece there were three very important city states on the island of Rhodes, namely Ialyssos (Trianta), Kamiros and Lindos. The closest to the present city of Rhodes was Ialyssos, an important centre of trade and culture, which extended in size to the northern tip of the island. These city states of Ialyssos, Kamiros and Lindos are also referred to as the "founding" states, as they decided to unite in 408 BC into one capital city, the city of Rhodes. The reason for this move was primarily to strengthen their position vis-Ã -vis Athens. After the establishment of the new capital, many of the island's inhabitants moved to Rhodes.

The city of Rhodes was designed by Hippodamus of Miletus as a rectangular system of streets, stretching from the Acropolis in the west to the east coast. To this day, the city streets bear famous Greek names, such as Homer Street, Hippodamus Street, Socrates Street, Pythagoras Street, Pericles Street, etc.

At present, the capital of Rhodes has more than 50 thousand inhabitants (the actual number is estimated up to 75 thousand) and is also the administrative seat of Dodecanese. The capital of Rhodes is divided into two parts, namely the Old Town and the New Town. In addition, the Acropolis of Rhodes towers over the city with the remains of magnificent monuments from the times of ancient Greece. The distance between the capital and Diagoras Airport is approximately 10 km.

The well-preserved medieval fortifications hide the true historic core of the capital - the Old Town of Rhodes, which was designated a UNESCO World Heritage Site in 1988. The city walls, reaching 4 km long and 12 m wide, have been preserved, including towers, round bastions and several entrance gates. There is a moat between the outer and inner walls, but it has never been filled with water. The old town is certainly one of the most beautiful places on the island from the point of view of history lovers.

Symi Square is home to the remains of the ancient temple of Aphrodite from the 3rd century BC, and you can stop by Argirokastrou Square to see the marble fountain or take a stroll along the reconstructed ancient Knights Street, boasting Gothic buildings with beautiful gardens.

The Palace of the Grand Masters, the seat of the highest knight of the Johannite Order, was built in the early 14th century. Its major reconstruction took place in the 1940s under Italian administration, as a devastating explosion of gunpowder in the mid-19th century left the palace in ruins. The building stands out above all for its imposing entrance, beautiful towers and battlements. The interiors of the buildings are equally impressive, beautifully decorated.

Rhodes also has a Turkish quarter with domes and mosques, which were built after the Turks invaded the island in 1522 and took power from the Knights. The most popular site in the Turkish Quarter is the Suleyman Mosque, with its clock tower. Also of interest is the Turkish Library, which preserves two rare manuscripts of the Koran. To this day, the area is still inhabited by the Turkish community, but unfortunately most of the mosques are in a poor state of decay. However, you can visit the many bazaars and shops run by locals.

The New Town of Rhodes is located north of the Old Town and offers tourists modern services of all kinds - offices, banks, hotels, restaurants, taverns, bars, shops, rental agencies, etc. In the centre of the town there is the so-called Bar Street, full of bars, discos, nightclubs and casinos, where nightlife lovers will find their favour.

But also in the New Town there are beautiful historical monuments or interesting museums. At the northern tip of the island is the marine aquarium, which was built by the Italians in the 1930s. The aquarium, in whose water tank visitors can see the most famous animals of the Mediterranean Sea, also includes a small natural history museum. The capital also boasts the National Theatre, popular for its excellent acoustics.

Tourists' steps often lead to the coastal promenade to the old port of Mandraki, where the Evangelismos Cathedral (Church of the Annunciation) and the New Market Hall (Nea Agora), built by the Italians in the shape of a hexagonal structure, stand.

One way to see the most interesting sights in Rhodes is to take a tour by tourist train (focusing mainly on the ancient monuments on the Acropolis - the stadium, the amphitheatre, the Temple of Apollo).

Rhodes is located on the northern tip of the island and is surrounded by the sea on almost all sides. At the northernmost tip of the island, the Aegean and Mediterranean seas meet. Today, the capital has three harbours, the most famous of which is the old port of Mandraki, nowadays used mainly by yachts and cruise ships. Arriving ships are welcomed by two bronze statues of a deer and a rope, which have become the modern emblem of the city.

According to one theory, it was here that the majestic Colossus of Rhodes, one of the Seven Wonders of the Ancient World, stood. A huge bronze statue of the sun god Helios, cast around 300 BC. by Chares of Lindus, stood on a stone pedestal. The medieval Greeks and Franks even called the inhabitants of the island Colossians after this symbol. Unfortunately, the Colossus did not dominate the wealthy island city for long; in 225 BC, a great earthquake ended its fate and the Colossus of Rhodes collapsed with its pedestal.

On the opposite pier stands the fortress of St. Nicholas, which functions as a lighthouse, and three old windmills.

Merchant ships mainly use the port of Emborio Limani. In the distance, about 30 km, on the horizon of the sea, you can see the Turkish mainland looming.

Apart from the harbours, the coastline around Rhodes is also made up of beautiful beaches. Along the north-west coast is the long pebble beach of Ixia. Due to its proximity to the capital, the beach is often crowded with tourists, but it can handle the influx quite well because it is spacious enough. Of course, there are complete beach facilities in the form of sun loungers, sports equipment rentals and tavernas offering Greek specialties. The beach is separated from the accommodation facilities by a main road.

Right at the tip of the island there is a green park with a marine aquarium building. Together with the adjacent beach, Eli provides tourists with a wonderful spectacle. It is really worth visiting this beautiful place and you can also swim from one sea to another. Eli beach runs from the tip of the island to the southeast, is about 800 m long and up to 80 m wide. There are several modern hotels near the beach, with taverns and other services of all kinds (shops, rental shops, hairdressers, etc.) on the ground floor. Eli beach is very lively.

Who is the centre suitable for?

The ancient town of Rhodes is undoubtedly one of the most beautiful places on the island. History buffs especially appreciate the large number of monuments, and almost perfectly preserved ones at that, from different periods and styles. It is exciting to imagine people working in the same buildings where the Knights of Malta lived 6 centuries ago. On the other hand, there are about 200 streets and alleys that simply don't have names. It's so easy to lose your bearings. If this happens, ask for Socrates Street, for example, it is the closest to the medieval centre.

If you're keen to explore Greek history on your holiday, walk among the ancient monuments and enjoy the nightlife after sunset, then Rhodes is the town for you. If you want to use the capital as a starting point for exploring the beauty of the whole island, then it's a little more complicated. Especially in the peak tourist season, you have to account for heavier traffic and it's not uncommon to spend up to an hour in the car before getting out of the city centre.

If you want to travel around the island, try looking for accommodation in Kolymbia, Lindos or Pefki (Pefkos). But wherever you are, make sure you plan a trip to the capital! The "night Rhodes" is also interesting.