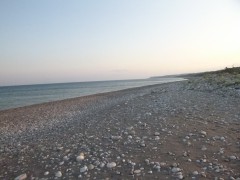 The small pebble beach of Salamina is located in the southeastern part of the Greek island of Rhodes, about 72 km southwest of the capital city.

Rhodos, Salamina on the map

Along the southeastern coast of Rhodes, near the resort of Lachania, the eponymous Lachania Beach is located. And because Lachania is a very long sandy and pebbly beach that passes through a sparsely built-up and inhabited area, some parts of it are named after the adjacent hotels and guesthouses for a better visibility. One such a part also is the beach of Salamina

Salamina Beach is located in front of several small villas (named after the Salamina villa), it is a small, unorganised pebble beach.