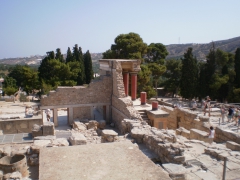 The Minoan Palace of Knossos is the biggest and best-preserved archaeological site of Crete. In the past, it was the political and administrative centre of the whole Minoan Civilization. Today, Knossos is a huge touristic attraction located close to the capital city of Heraklion.

The archaeological excavations in Knossos have discovered traces of human settlements that are going back into history to the Neolithic Period.Â The political and social importance of Knossos grew in the 19thÂ century BC, during the period of the first Minoan PalacesÂ when the first big palace was built. In the time of its biggest fame,Â Knossos was the administrative, political and religious centre of the Minoan CivilizationÂ and a home of 5000 to 8000 inhabitants.

However, Knossos was destroyed and forsaken. There are several theories of destroying the city of Knossos. Some sources say that Knossos was plundered by the invasion of the Sea Peoples other think that the fall of Knossos was caused by the volcano eruption on the island of Thera (todayÂ´s Santorini). The eruption of the Strongyli Volcano had unimaginable parameters and hit the coastline of Crete as well as of Asia Minor. Therefore, the volcano eruption and the end of the Minoan Civilization are often put into context.

Knossos and the legacy of the Greek Mythology

In Greek Mythology, Knossos was the seat of king Minos who was the ruler of Crete. Minos was the son of Zeus and Europa. When Zeus fell in love with Europa and seduced her transformed into a golden bull. After that, he carried her to Crete where she gave birth to three sons, Minos, Sarpedon and Rhadamanthus. When Minos grew up, he became the king of Crete where he built a giant naval fleet which he believed in so much that he even refused to encircle the city by walls.

The wife of Minos was queen Pasiphae. Pasiphae fell in love and got pregnant with a white bull and after some time, she gave birth to Minotaur a monster of human body with a head of a bull. The embarrassed king Minos asked the famous Greek builder and inventor Daedalus to build a big labyrinth where he could imprison Minotaur. When the son of Minos Androgeos triumphed in the Big Games in Athens, he was killed by the jealous Athenian king Aegeus. For that reason, Minos declared war againstÂ AthensÂ and defeatedÂ Aegeus. In revenge for killing Androgeos, every nineth year, Athens had to send 7 virgin girls and boys to Crete where they were sacrificed to Minotaur until Theseus killed the monster.

The ruins of the Ancient city of Knossos firstly came across the Cretan businessman and amateur archaeologist Minos Kalokairinos in 1878. His work was later continued by Heinrich Schliemann, the legendary discoverer of Troy who exposed a part of the palaces. However, he did not buy the archaeological site as he was considering the price to be too high. In 1900, the British archaeologist Sir Arthur Evans bought the place and the excavations started again. Under his lead, soon, the whole complex of buildings, palaces,Â stairwaysÂ and streets was discovered.

The excavations under the supervision of Sir Arthur Evans lasted almost 40 years and gave the archaeologic site its todayÂ´s look which is very unique, but also a little controversial as Arthur Evans had very untraditional archaeological methods where he often demolished parts which he thought not to be very interesting and essential and on the contrary, he repaired or rebuilt using concrete those buildings which he believed to be much more important. In this way, the excavations are made also today. For this reason, some opponents of Arthur Evans call the archaeologic site derogatorily "Disneyland Knossos", but in fact, the people can make themselves a nice image of how big, decorated and developed this place was because very often, at many other archaeological sites, it is possible to see just fragments of basements and columns.

The whole complex counted around one thousand buildings of various purposes which were connected together by small corridors and stairways what truly reminded a huge labyrinth. The word "labyrinth" (Greek "labyrinthos") was originally derived from the ubiquitous symbols of double axes known as "labrys". According to this, Knossos was called the "House of double axes" and by the time, the word labyrinth became a synonym for a maze.

The place was divided into four wings made in some places even by four-storey houses. In the complex there where buildings for the kingÂ´s and queenÂ´s use, living- and administration rooms, storages, halls, workshops and temples. The inhabitants of Knossos were supplied by water and could enjoy the luxury of bathrooms. The open corridors and stairways were fringed by big columns. In the middle of the site, we can find the so-called Central Square situated approximately 15 metres above the surrounding terrain from where you can see the platform of the palace as well as the uncovered basements.

To the most interesting rooms in the palace definitely belongs the royal throne room where the original throne of king Minos made out of alabaster from 1700 BC can be seen. The boudoir of the queen is situated right above the throne hall. The beautiful frescoes and paintings with motives of animals, plants, mythical creatures and humans testify how talented the Minoan artists were, despite the fact that we can see just replicas as the originals are put in the Archaeological Museum in Heraklion. The most famous frescoes in Knossos are the "Dolphin fresco", "Lily Prince" and "Bull-Leaping".

In the ruins of Knossos also many dishes, tools and its fragments were found. Large containers usually of a human size called "Pithos" which can be seen in here were used for storing of wheat, oil, water, etc. Very important findings discovered in the palace are clay plates written in the A and B Linear Fonts which could first be researched and encoded when Sir Arthur Evans has died as he probably wanted to try to encode the fonts by himself.

Another part of Knossos â€“ namely the ruins of the so-called Little Palace and a few villas lie under the ground in the neighbourhood of the Knossos Palace.

A hint in conclusion

Except the places where actually excavations are being made you can move freely all over the archaeological site of Knossos and explore what you are interested in. In Knossos, there are just very few places where you can hide from the Greek sun. Therefore, always remember to have enough water with you, wear a head protection and use a sun cream.