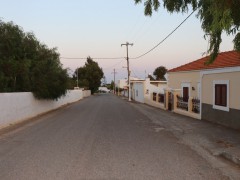 The small and quiet seaside resort of Lachania (sometimes also Lahania) is located on the southeast coast of the Greek island of Rhodes, about 74 km south of the capital city. It is a very peaceful tourist area.

Rhodos, Lachania on the map

The tourist resort takes its name from the small village of Lachania, which lies further inland and has a real Greek atmosphere. The streets are lined with traditional white Greek houses, often with blue doors and shutters, and the village also boasts several Orthodox churches and pleasant cafes, such as a lovely one in the square hidden in the shade of a mature plane tree. Behind the village, the locals maintain a few fields and olive groves.

The more touristic part of Lachania is located right on the coast, where several small villas and hotels have gradually been built and now also one modern and large hotel resort with several swimming pools and perfect facilities for its clients.

Otherwise this part of the island is very deserted.Â In general, the south of Rhodes is much less built up and populated than the touristically exposed north. In the nearby village of Lachania, visitors can enjoy a pleasant break at the local cafe, but if you're looking for some mini-markets, a post office or a pharmacy, you'll have to head to the larger tourist resorts.

Less than 10 km to the north lies the resort of Gennadi. Gennadi also has a car and motorbike rental service and regular bus routes to the capital city of Rhodes (about 74km away). So if you want to get out of Lachania, a car is a must.

Coast and beach of Lachania

The coastline in this area is mostly covered with a mixture of sand and pebbles, but there are also parts that are more sandy or purely pebbly. Generally, the whole beach along the resort is called Lachania Beach, but since it is really long, some small beaches are already named after the adjacent hotels.

For whom is Lachania suitable

The resort of Lachania is situated at the foot of the mountains that stretch across the interior of the island and it is indeed a very quiet, almost deserted area. We would therefore recommend the resort especially to those who want quiet on their holiday and who are not comfortable with the busy holiday resorts of the north.

Accommodation in Lachania is also popular with surfers heading to the very south of the island, to Prasonisi Beach, which is not far from here and is definitely a good tip for a trip if you are staying in the area (the beach is about 25km away as you have to go through the village of Kattavia). The local beaches of Agios Georgios (Saint George) and Mavros Kavos, beautiful romantic beaches with sand dunes and a slow entry into the sea, are also popular destinations.

Thus, renting a car is a must in the case of Lachania. While bus services are reliable and plentiful on Rhodes, you need to get to one of the larger resorts, such as Gennadi.