Nature on the island of Rhodes 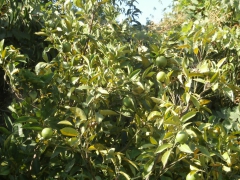 The nature on Rhodes is very beautiful and especially in spring, the island abounds in greenery and colourful flowers - it is also called the "pink" or "hibiscus" island. All over the island, you will find beautiful mature palm trees, flowering cacti and succulents, wild roses, dense olive groves and many other different plants and flowers. Hidden among them, the "dragon of Rhodes" may be lurking.

The southern Sporades and among them the island of Rhodes, lie at the junction of two continental plates. The geological tension in this area is still felt today and occasionally stronger earthquakes can be experienced. Rhodes is quite hilly and the inland is made up of mountains with extensive forests. The landscape falling towards the coast is more green and especially in the lowlands and valleys very fertile and agricultural. The olive tree and the grapevine are clearly the typical agricultural plants of Rhodes. Almost every meal can be accompanied by juicy olives and delicious wine. The cultivation of citrus fruits, especially oranges, mandarins and lemons, also plays an important role. Thanks to the favourable climatic conditions, aubergines, tomatoes, cucumbers and potatoes also thrive here and can often be harvested twice a year. You can also often smell the scent of lavender, thyme and oregano as you walk around the island. The mountain areas are characterised by sparse rock heath and macchia scrub, collectively known asÂ "fagana". The forests consist mainly ofÂ dwarf oaks, aleppo pines, cypresses and chestnuts.

In contrast, the animal world is relatively poor, especially in terms of the number of species. The classic picture is of the ubiquitous goats climbing the rocky hills and herds of grazing sheep. Farmers also use donkeys and mules as working animals. Due to the local terrain and climate, Rhodes is home to a large variety of lizards and geckos. While wandering through the countryside, you may also come across the "Rhodian dragon", a large grey-brown lizard with light spots on its back. Sometimes, it can grow up to half a metre in size, which can look dangerous at first sight, but it is harmless. There are several species of fish in the sea around the island and the most abundant are the streaked gurnard, tuna, mackerel,Â gilt-head bream and cod. Many colourful fish and crustaceans can also be seen near the reefs. However, the once very rich underwater world is now much poorer due to heavy water pollution and overexploitation of the aquatic environment.

The northern part of Rhodes is the most built up, but there are also places, that are not affected by tourism. On the east coast there are beautiful beaches, mostly sandy or sandy-shingly, with calmer sea. The west coast, on the other hand, is exposed to stronger winds and bigger sea waves and is thus particularly suitable for water sports such as windsurfing, etc.

The biggest natural attractions of Rhodes include the Valley of the Butterflies (Petaloudes), where flocks of theÂ Jersey tiger butterfly arrive every year, the Seven Springs Park (EptÃ¡ PigÃ©s) with its natural river or the natural phenomenon called the "kiss of the two seas" with the Prasonisi lighthouse.

← Food, drink and recipes Weather →
back