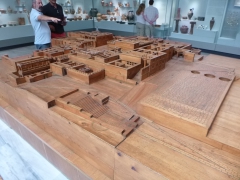 The Archaeological Museum of Heraklion does not only belong to the biggest and most significant museums in Greece, but also in Europe. It protects archaeological artefacts coming from Crete and is unique especially for its wide collection of items from the Minoan Period.

The Archaeological Museum in Heraklion collects significant historical artefacts from whole Crete and covers the time from the New Stone Age (Neolithic, 5th millennium B.C.) until the Late Roman Period (4th century). However, the biggest vaunt of the museum are the treasures of the oldest civilisation of Europe â€“ Minoan Culture, which has no similarity anywhere else in the world. We can find many unique items and tools from all periods of the Minoan Era, what means from the Pre-Palace, Palace and Post-Palace phase. The Minoans ruled over Crete from around 2800 â€“ 900 B.C. and the most famous archaeological sites are the palaces of Knossos, Phaistos, Agia Triada, Malia and Kato Zakros.

The exposition is organized chronologically and also after the places of uncovering in several rooms. To the most interesting exhibits with no doubts belong the fragments of the original frescoes of Knossos (e.g. the famous fresco of the "Lily prince", or the Disc of Phaistos (a very valuable and mysterious artefact â€“ a plate made out of burnt clay and labelled from both sides, where the font is situated spirally from the edge into the middle and could not be encoded until today), marvellously decorated ceramics from the palace in Phaistos, sculptures of the Minoan goddess (called the "Snake goddess" after the snakes, which the woman is holding in her hands) or decoration and jewellery, used by the Minoan women. A golden pendant displaying two bees transporting a drop of honey, which is considered to be a top art of that time, was found in the archaeological region of Malia. The art of the Minoan culture represents also the BullÂ´s head (rhyton) carved into black steatite and found in Knossos. Nevertheless, in the museum are man more things to be seen â€“ decorated sarcophagi, ceramics, jewellery, occult items, tools for hunting and working, etc.

The museum is located in the centre of the capital city of Heraklion, at the same place, where a catholic monastery of St. Francis was standing during the Venetian dominance. Before the monastery was destroyed by the earthquake in 1856, it had counted to the richest and most significant monasteries of Crete and was decorated by big Byzantine frescoes. The construction of the museum started with the arrival of the 20th century and was finished in 1940. By the beginning of the 21st century it was widely reconstructed and extended and since 2014 it is open in new shape for the public again.