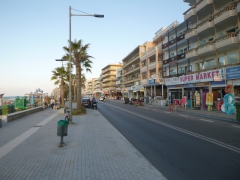 The beautiful historical city of Rethymno lies in the northern part of Crete, approximately 81 km west from the capital city of Heraklion (Iraklio). Rethymno is a fascinating and lively holiday resort with many modern services.

KrÃ©ta, Rethymno on the map

The harbour city of Rethymno or Rethymnon is the 3rd biggest city of Crete and the capital city of the Rethymno Prefecture. It lies on the north coast of the island between the cities of Chania (approx. 60 km west) and Heraklion (approx. 80 km east) and is washed by the Cretan Sea.

Rethymno is a beautiful example of coexistence of the old and new. It has a long and rich history what is testified by the many well-preserved historical and cultural sights coming from various time periods. At the same time, the city doesnÂ´t forget to ensure the comfort for the tourists. Therefore, we can find beautiful hotels, numerous shops, restaurants and a lot of tourist facilities near the calm Rethymno Beach. It is also a university town, as the Department of Sociology of the University of Crete is situated here since 1974.

The todayÂ´s city of Rethymno lies on the place where the ancient city of Rhithymna was existing in the 5th century BC. After the Byzantine Period, the city was ruled by the Venetians since 13th century who strengthened its walls and made the city more important for the naval trading as the Venetians needed another port city for the ship cruises along the north coast between the Chania and Heraklion. Rethymno was elevated to theÂ regional administrative centreÂ and the capital city of the eponymous prefecture of Rethymno.Â New houses were builtÂ around the harbour where mainly the Greek aristocracy was living, but because the walls were not strong enough to protect the harbour and the inhabitants the Venetians decided to build the big Fortezza Fortress above the harbour.

During the Venetian rule the people also started to devote themselves more essential to art and culture, especially theatre, painting, literature and architecture. Unfortunately, the time of prosperity was ended in 1646 when Rethymno was conquered by the Turks. Since that time until the Russian invasion in 1898, the locals were mostly farmers. Culture and art got to the forefront in 1913 when Crete was annexed to Greece.

Rethymno and its most significant sights

For history lovers, the old city of Rethymno is one of the most beautiful architectural regions of Crete where you can walk on narrow picturesque streets with unique sights, mostly from the time of the Venetian and Turkish rule, as churches, mosques, minarets or traditional Venetian houses with covered wooden balconies. The tourists can relax in the nice tavernas and restaurants with traditional Greek music, visit small shops with various goods or just walk through the city park.

Above the old city, the ruins of the biggest Venetian fortress on Crete-Fortezza are towering and proudly representing the dominant of Rethymno.

A part of the city is also a beautiful sandy beach awarded by the Blue Flag of the EU starting east from the Venetian harbour. The beach is well organized and has a gradual entry into the sea.Â

The beach of Rethymno is actually the beginning of the long shore with nice sandy beaches going along the north coast further to the east though the popular resorts of Missiria, Adelianos Kampos, Pigianos Kampos, Sfakaki until the resort of Skaleta.

Who is the resort suitable for ?

The city of Rethymno has something for each visitor. The old city itself is a single chapter where the history lovers can spend hours and days. They have a good touristic background in form of tasty tavernas and restaurants and all kind of other services. If you rather prefer to relax at the seaside the Rethymno Beach belongs to the most beautiful beaches of CreteÂ´s north coast.

The resort can be an ideal starting point for travelling through central and western Crete. In the city, there is a regular bus transport, taxi cars and car and motorbike rentals. Trips to the monasteries of Preveli or Arkadi as well as to the archaeological site of Eleftherna, relaxing in the nature of the Kournas Lake or a walk through the gorge of Mili are just a few of the many travel possibilities.

Everyday boat cruises go to various parts of Crete or even to Athens.