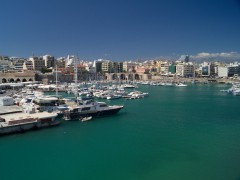 The capital city of Heraklion (Iraklion) is the biggest city of Crete and its trade and touristic centre. It lies almost in the middle of the north coast of the island and has many beautiful and significant sights.

KrĆ©ta, Heraklion (Iraklion) on the map

Heraklion is the most populated Cretan city, it has a population of around 150Ā 000 citizens, what is approximately a quarter of CreteĀ“s total population. This number is still growing because the people are moving to Heraklion mostly to find a job. The city is an important trade centre of the island. It has a big harbour as well as international airport, named after the most famous Cretan writer Nikos Kazantzakis, whose most famous novels are Zorba the Greek or The Last Temptation of Christ.

The city is also a significant touristic resort, which is visited everyday by thousands of people. However, according to several travel portals, the city does not belong to the worldĀ“s most beautiful capital cities usually because of its big industry zone. The city representatives try to make Heraklion a more pleasant place by establishing green parks, organizing traditional markets or highlighting the sights from the Venetian or Ottoman Periods.

To the main symbols of Heraklion definitely belong the historical centre with the small Plateia Venizelou Square and the massive Koules Fortress. About 6 km south from the city we can find the most important Cretan archaeological site ofĀ Knossos and opposite of the city, the small uninhabited Dia IslandĀ which is interesting because of the endemic Kri-Kri Goats living hereĀ is lying in the sea.

The history of Heraklion is very long, it goes back to the Minoan Period around 2Ā 000 BC, when the sea settlement served as a strategic harbour of the ancient city of Knossos. In 824, the Arabians built a huge ditch around the settlement and established the capital city Chandax (āChandaxā comes from Arabic and means āditchā). The building of the ditch had two senses: first - to protect the city against the enemies and second - to prevent escaping of the slaves from the city, who the Arabians were trading with.

To significant historical periods of Crete belongs also the time when the island was a part of the Eastern Roman Empire, which is known as the Byzantine Empire and the time of Venetian domination over Crete. At the beginning of the 13th century, after Byzantine Empire was plundered by the Fourth Crusade in 1204, the Venetians took the control over Crete and strengthened the fortification of the city by deepening the ditch and building the massive fortress of Koules (Rocca al Mare) for a better protection of the harbour. They renamed the city from Chandax to Candia and established the Kingdom of Candia.

In the second half of the 17th century, Venetians were pushed out of Crete by the Ottomans after the Siege of Candia (1648-1669). In 1841 the Turks made the city of Chania, located in the western part of the north coast, to the new capital city of the island.Ā Chania took over the role of the main economic centre of CreteĀ and remained it until 1971, when Heraklion named after the mythical hero Heracles was made to the new capital city of the island.

To worldwide famous sights of Crete belongs the most famous Minoan Palace of Knossos, which lies around 6 km south east from the capital city of Heraklion. The archaeological site of Knossos is huge and thanks to wide reconstruction, the visitors can quite easily make themselves an image of how the palace was looking like during its biggest heydays. The artefacts found in Knossos and in other archaeological sites of Crete are put and shown in the Archaeological Museum in Heraklion (or Kretikon Museion)Ā where the biggest exposition of the Minoan Period can be seen.

Worth a visit is surely the old historical city centre with the small Plateia Venizelou Square (The Venetian Lion Square) where the MorosiniĀ“s Lion Fountain, one of the symbols of Heraklion built in the 17th century, can be seen. South from the Lionsquare we would come to the Plateia Eleftheriou Square, where the Archaeological Museum and the Basilica of St. Mark can be visited. On the contrary, to the north we would see the old Venetian harbour with the fortress of Koules (also known as Rocca al Mare). The Koules Fortress is another symbol of Heraklion which is today used for social and cultural events.

The Basilica of St.Titos named after the first bishop and patron of Crete is a significant church of Crete. However, the original church was converted into a mosque during the Ottoman Period and later destroyed by the massive earthquake in 1856. The todayĀ“s look of the church is from the year 1925.

It is also possible to see the grave of the mentioned-above writer Nikos Kazantzakis.Ā He is buried on the southern Martinengo-Bastion of the Venetian city wall. As he was excommunicated from the Catholic Church for his novel āThe Last Temptation of Christā he was not allowed to be buried on a cemetery. The epitaph on his grave says "I hope for nothing. I fear nothing. I am free."

If you are a fan of history you will probably like to visit also other Minoan palaces of Phaistos, Malia, Agia Triada or Kato Zakros. Although these archaeological sites are not as big a Knossos they are still very interesting. For example, in Phaistos Palace the famous and mysterious āPhaistos Discā which is now shown in the Archaeological Museum in Heraklion was found.

South of Heraklion you can visit the ruins of the Roman city of Gortyn popular for the Roman Odeon with the so called "Gortyn Law Code" carved into the stone blocks of the building and for the Byzantine church of St. Titus a disciple of Paul the Apostle and the first bishop of Gortyn.

If you travel with children and want to have a little easier programme try to visit one of the adrenaline waterparks Watercity Waterpark Crete or Acqua Plus. Another very nice and interesting tip for trip is the sea aquarium Cretaquarium or the big entertainment-education complex Dinosauria with moving and roaring dinosaurs.