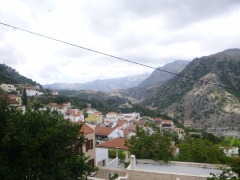 The scenic inland village of Argiroupoli lies in the middle part of the Greek island of Crete, approximately 104 km west from the capital city of Heraklion (Iraklion). Except beautiful nature, Argiroupoli is also interesting because of several sights, which are reminding on its stormy past.

The mountain village of Argiroupoli lies approximately 27 km south west from the city of Rethymno, on the slopes of the Psiloritis mountain. It is quite big compared with other outlying villages, around 700 residents are living here. In the history of Argiroupoli, there was time of rise and fame, but unfortunately also of total demise. The village was totally destroyed several times, but rebuilt again, maybe also because of its beautiful nature full of green and waterfalls.

The historical traces in the region of Argiroupoli are taking us back deep into history, namely into the Minoan times. The close standing chapel of Agia Pareskevi is decorated by various architectural elements, which are typical for the Cretan culture of the Minoans. The biggest prosperity of Argiroupoli occurred during the time of ancient Greece, when the settlement was known as Lappa. The word â€žpolisâ€œ not standing by chance in its ulterior name because Argiroupoli kept the status of a big and prosperous city also during the Roman and Venetian period. This is proved also by many artefacts, which were found in the neighbourhood of the village. There is an archaeological area called "Ancient Lappa" close to the todayÂ´s village of Argiroupoli where you can see for example a Roman bath or good preserved graves, dug into limestone rocks.

The importance of the village declined rapidly in 67 BC, when it got involved into the power struggle of the two Roman emperor contenders, Octavius and Marcus Antonius. The locals were on the side of Octavius, for what his opponent Marcus Antonius took revenge on them by destroying the village. When later Octavius became the Roman Emperor, he supported the rebuilding of the village, which soon became successful and started to profit again.

Several impressive sights remained preserved from this time, as for example Roman bath, aqueduct, old road, which was connecting the Roman tombs or the beautiful mosaic floor, made out of approx. 7000 pebbles. Another very significant sight from the time of the Romans is the Church of the Five Virgins (Pente parthenes). It reminds on the five virgin women Martha, Athen, Maria, Thekla and Marianna, who sacrificed their lives as Martyrs here for the Christian belief, during the persecution of Christians by the emperor Decius in the year 250. There are also Roman tombs in the neighbourhood of the church. The times of the Venetian dominance are still represented here by the so-called Venetian gate.

Another tragedy for Argiroupoli occurred in the 9th century, when the village was plundered and destroyed by Saracens. Nevertheless, the people started to settle down here again, they built new houses and the village grew up again with time. In the Medieval age, the city got its new name of Argiroupoli, what means in translation "Silver city". However, the locals had to experience tough times also under the reign of the Turks, when the village was called Giadorpoli ("Donkey city").

Today, ArgiroupoliÂ is a calm mountain village, which attracts at the first sight above all with beautiful surrounding nature. It is very soothing and refreshing to walk outside of the built-up area into free nature and to enjoy fresh green colours of the local vegetation. In the neighbouring forests, you can also see a thousand years old plane tree or natural water springs, turning into waterfalls.