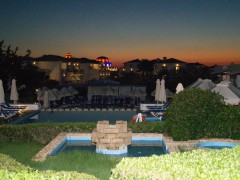 The pleasant and well-equipped Anissaras Resort is located in the northern part of Crete, approximately 25 km east from the capital city o Heraklion (Iraklion). It is popular for its nice sandy beaches.

The first mentions of settlements in the region of Anissaras come from the time of the Turkish rule, when several Turkish families built their houses and set up a village here. After the Turks left Greece, their houses were used by the inhabitants of the Lassithi Plateau who migrated to the coast during the winter months. The Lassithi Plateau is a flat area in the centre of the Dikti Mountains lying in the eastern part of Crete´s inland which is very fertile during the summer time, but inhospitable and covered by snow during the winter.

Today, Anissaras is a part of the popular touristic region of the similar villages of Kato Gouves, Analipsi, Gournes and Anissaras which is almost 6 km long and stretches along the north coast of Crete.

Anissaras is a lively and well-equipped holiday destination and those visitors who chose it for their vacation can rely that they will have good service. There are apartments and hotels of various standards, nice tavernas and restaurants serving delicious food, souvenir shops and minimarkets. The beautiful beach with bars and music clubs ensures entertainment also after the sunset.

If you consider the resort´s shopping possibilities and nightlife not to be good enough you can visit the close resorts of Malia and Hersonissos or the capital city of Herakion which are popular for their shops and night entertainment.

One of the biggest attractions of the Anissaras Resort definitely are the pleasant and well-organized beaches where the visitors have plenty of sunbeds and umbrellas available. A matter of course also are beach bars, sport clubs, water sports possibilities and several typical Greek tavernas serving delicious dishes.

The main beach is long and sandy with a gradual entrance into the sea. However, on some spots the sea bottom is made mainly by stones and rocks what is typical for sea urchins. Therefore, it is recommended to wear boots during the bathing. The beach is quite popular among the tourists because it has many entertainment possibilities for children as well as for adults. The underwater rocks attract snorkelling and diving fans.

Trips and sights in the close neighbourhood

Anissaras Resort lies close to the main road connecting the capital city of Heraklion with the resort of Agios Nikolaos, what gives you the option to go wherever you want on the island. You can travel either by bus or use the car and bike rental.

We also should not forget to mention the natural attractions as the Lassithi Plateau which is the biggest mountain plain of Crete located approximately 30 km in the direction into the inland. The plain was irrigated by many small windmills in the past what is still apparent even today. In the close neighbourhood of Lassithi Plateau we can also find the Moni Vidianis Monastery standing on its edge or the beautiful stalactite cave of Dikteon Andron where the god Zeus was born according to the Greek Mythology.

Above the neighbouring city of Analipsi you can walk through the Aposelemis Gorge which although it is not that popular as the Samaria Gorge, you can have a nice hiking experience and enjoy beautiful sceneries and untouched nature here.

The water entertainment lovers may like the wide waterpark Star Beach Water Park located approximately 5 km from Anissaras while the fans of dancing and nightlife are usually heading to the close resort of Hersonissos. (Because of the close distance to Anissaras the resort is also sometimes being called “Anissaras Hersonissos”).

Who is the resort suitable for ?

Most of the typical holiday visitors will be satisfied in Anissaras because the resort offers quality touristic background as well as various options of enjoyment. The resort is lively and has beautiful and well-equipped beaches. However, the resort is quite crowded during the summer time, therefore it is not recommended for those people who prefer to relax in peace and to have privacy during their vacation.