Nature on the island of Crete 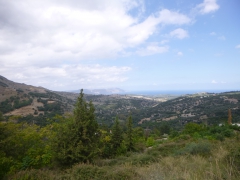 Crete, as the southernmost of the Greek islands, is also one of the warmest areas of Greece. It has a Mediterranean climate with mild, rainy winters and hot, sunny summers. However, due to the mountainous terrain, there are significant differences between the different areas. Crete is particularly rich in plant life, and a good number of these plant species grow only here on the island.

The Greek island of Crete is characterised by a mild Mediterranean climate with mostly warm and dry weather. Only around 500 mm of rain falls throughout the year, but there are big differences between the different parts of the island. The White Mountains receive the most rainfall, while the south-eastern part of Crete receives the least.

Winters here are mild, with rain in the lowlands and snow on the mountains. The snow on the highest peaks lasts until spring, and the snow-capped White Mountains can sometimes be seen as late as May. Most of the precipitation falls between October and March, making Crete beautifully green in spring. On the other hand, summers are very dry and many streams and rivers dry up at this time.

Also, in general, the western part of Crete is more forested and the streams keep the humidity even in summer. On the eastern side of the island, only smaller shrubs grow and the arid desert-like areas are no exception. The east of Crete is much drier and most of the streams dry up during the summer. On the other hand, small rivers and streams can be found in the south of the island, where they flow down from the Ida Mountains.

The coldest months are January and February, while the hottest months are July and August. It is sunny almost all year round in Crete, with the most intense sunshine from April to October.

The summer season includes the phenomenon known as 'meltemi', i.e. strong northerly winds (also known as Etesian winds in antiquity). However, these winds are irregular and very unpredictable, so neither the location nor the strength of these winds can be estimated in advance. In general, the southern coast of the island is better protected from them. Mostly, however, the meltemi are not too disturbing, on the contrary, they make staying in hot coastal areas more bearable and the sky clearer. Only occasionally do you encounter really strong winds, which are unpleasant because they blow sand into your eyes and raise big waves in the sea.

But at the same time, alongside the high mountains, there are also fertile plains, deep valleys and wild gorges. There are two major plains in Crete - the Messarian Plain and the plain near Chania. There are many more plateaus, for example the Lassithi plateau with its windmills. One of Europe's longest and deepest gorges, the Samaria Gorge, runs through the interior of the island, and the Aghia Irini Gorge, the Aradena Gorge and the Valley of the Dead are also popular tourist destinations.

The subsoil of Crete is rich in minerals, including iron, lead, magnesium, sulphur, copper and zinc, as well as precious metals such as gold and silver.

Looking at a geographical map of the island, the three high mountain ranges mentioned above form a belt almost the entire length of the island, separating the northern and southern coasts of Crete. This is not only visually, but also in terms of climate and weather conditions. The south of Crete tends to be warmer, but the landscape and the seabed sink faster. The north of the island is on average some 3 degrees Celsius cooler, but it's flatter, the sea bed also sinks slowly and the beaches are generally more suitable for swimming.

Most of Crete is rather arid to arid, with the western part of the island being more forested and the lowlands in the coastal areas being the most fertile. Olive trees are a typical plant of Crete, and several million of them are said to grow on the island. However, due to the hot and dry summers, they often have to be artificially irrigated.

The composition of the vegetation changes as we move from the flat coastal areas up into the mountains. In the lowlands we find small vegetable fields, fruit gardens and olive trees. In the south of the island, where it is very warm, vegetables are grown in polytunnels to avoid unnecessary evaporation of moisture. If you travel to this part, you won't miss the bright white sails covering the fields. The Ierapetra area, for example, is famous for growing tomatoes, which are then exported further afield to Europe.

If you go for a walk in the foothills, you will soon be surrounded by the intoxicating scent of various flowers and herbs. For example, rosemary, thyme, lavender, sage and myrtle thrive here. And various shrubs and small trees are ubiquitous, especially the carob tree (sometimes called karob or "carob bread") is typical of Crete. Olive groves and vineyards are also often planted here. However, much of these areas are covered by dry meadows and pastures.

Originally Crete was full of cypress and cedar forests, but their numbers have been greatly reduced by deforestation. Today, in addition to the typical cypress trees, we see dwarf oaks, Halep pine in the coastal areas and then only shrubs and lower vegetation consisting of heather, hornbeams, agaves and cacti. In spring, however, the whole island blooms and plays with all its colours. There are poppies, daisies, hibiscus, tulips and orchids in bloom, as well as many different kinds of herbs. The city streets are often decorated with beautiful blooming oleanders.

There is also the unique palm grove of Vai, where palm trees grow naturally on the banks of a small stream. The stream flows into the sea nearby, where there is also a beautiful sandy beach with azure waters. Moreover, the grove is of great ecological value, as the wetlands here also provide shelter for many animals, including several species of birds.

In the meadows and pastures you can see herds of sheep and goats grazing, sometimes they also keep donkeys and other domesticated animals. Smaller species such as rabbits, weasels and badgers tend to live in the wild. In the seaside resorts there is not much to see in the way of animals, just stray cats and dogs.

However, this doesn't mean that Crete is poor in terms of animal life. We just have to look more closely, because a lot of the animals come from the invertebrate kingdom, such as spiders, insects, snails, worms. A typical representative of the insect kingdom in Crete is the cicada. It is even said that several hundred species of animals are endemic, i.e. living only here in Crete. A large number of small mammals, frogs, snakes, turtles, lizards and bats live here. Crete is also an important migration point for many species of birds.

But Crete also has its own specific species of animal, namely the goat without eyes, or "kri-kri goat", which is characterised by its reddish-brown colouring and long horns. The kri-kri goat is an endemic species. Unfortunately, over time, it has hybridised with the common goat and the original species of kri-kri goat now lives only in a few places in Crete. If you want to see it, you have to go to Samaria National Park or to the islet of St. Theodore and the island of the god Zeus.