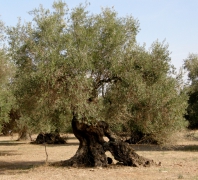 Even in ancient Rome, the olive tree was held in such high esteem that cutting it down was punishable by death. The olive tree is a very resilient tree and can cope with everything except human intervention and a big winter. It doesn't mind long droughts, salt water, strong winds and many times it can even survive a fire (thanks to its admirable regeneration). It can live even in stony soils, and solves the lack of water with very long roots. Some olive trees are more than 2 thousand years old.

The most widespread species in southern Europe (where temperatures do not drop below minus 10 degrees) is the European Olive Tree (Olea europaea). It is an evergreen tree (or shrub) with stiff, pointed, grey-green leaves that are silver on the reverse. It reaches a height of about 5-10 m. The flowers are small, creamy white and pleasantly scented. The trunk of the olive tree is relatively short, wrinkled, twisted and its crown is usually branched.

Olive trees have been cultivated as far back as 8 000 years ago in the Middle East. They were cultivated by the Phoenicians, the Greeks and the Romans, who planted olive trees in all the territories they conquered and thus contributed to their spread almost all over the world. The Romans were also the first to press olive oil from olives in a more modern way, which gave it a much longer shelf life.

Supposedly the oldest, largest and best preserved olive tree in the world is the olive tree called Vouves (Î•Î»Î¹Î¬ Î’Î¿Ï…Î²ÏŽÎ½). It grows in the village of Ano Vouves in Kolymvari, Crete, Greece. It is also the most visited, with more than 20,000 tourists coming to admire it every year. In 1997 it was declared a protected national monument. The trunk has a diameter of about 4.6 m and a circumference of about 12.5 m. The branches grow out of the trunk in spirals, giving the crown a unique and beautiful shape. To this day, this tree produces many olives that are highly prized. It was originally a wild olive tree before the tsounati variety was grafted onto it at a height of three metres. Its age cannot be precisely determined as it has a hollow trunk, which is characteristic of old olive trees, and is estimated to be 3-5 thousand years old.

For the Greeks, this olive tree is a sacred tree. In 2004 and 2008, in a cult ceremony, several wands were cut from it, which were then used to make wreaths for the marathon winners at the Olympic Games in Athens and Beijing. Olive branches from the Vouves olive tree also adorned the heads of Greek athletes two years ago when they carried the Olympic torch into the Olympic Stadium in London during the opening ceremony.

Myths about the origins of Athens

The gods Athena and Poseidon had a dispute over who would protect the city and after whom it would be named. There was no end to the quarrel, so the other gods gathered on Olympus and decided to give them the task. They were both to give a gift to the city and the winner would be the one whose gift was more beneficial to the city. Poseidon (the god of the seas) stuck his trident into the rock and a spring of water gushed out of the stone. But the water was salty and therefore of no use to the people. Athena (goddess of wisdom and war) stamped her foot on the ground and a green tree grew out of the earth - the world's first olive tree. The olive tree is a very unpretentious tree and its fruit, the olive, has many uses. Athena triumphed and the city was named Athens in her honour and Athena became its protector.

In our conditions the olive tree can be grown, but more as an ornamental plant than for its fruit. Olive trees can grow fruit (olives), but they are not comparable to the real thing and cannot be eaten.

Olive trees cannot be planted in our gardens because they are not hardy enough to withstand winter weather and may have problems with winter moisture. In areas with milder winters, experienced gardeners can successfully overwinter the plant with a bulky winter cover, but without additional insulation the plant will suffer in more extreme winters. In winter, it is best to place the olive tree in a bright but unheated spot in the house. But not in a heated living room, where the olive tree will use up all its energy reserves. In our area, the olive tree flowers mostly in the first week of early summer, with countless tiny yellow flowers. If the olive tree does not produce fruit, it is because it needs a partner for pollination. Plants grown from seed are partly or not at all self-pollinating and need a second plant for pollination. If you only want fruit from one plant, you need to buy a grafted self-pollinating plant that produces green or black olives depending on the variation of the tree. In the beginning, olive trees grow faster, but densely. They will only form a crown if you prune them. Even very small olive trees that are radically pruned every year can become very old. Olive trees are mainly grown here as portable plants and are therefore fully dependent on the contents of the growing container. We must therefore provide the plants with the right substrate and ensure that they are supplied with nutrients in the form of fertiliser. In our climate, the plants can be brought outside after the winter dormancy period as early as April. Olive trees prefer sunny, wind-protected locations. After overwintering, it is necessary to get them used to their new environment gradually. Terraces, balconies, lobbies and verandas are very suitable habitats.